Even though the mail and attached photograph look fictitious; yet its real and original. The detail of this phenomenon will be discussed after you go through the contents of following mail having image of the said photograph:

THIS IS A FIRE RAINBOW - THE RAREST OF ALL NATURALLY OCCURRING ATMOSPHERIC PHENOMENA. THE PICTURE WAS CAPTURED THIS WEEK ON THE IDAHO/WASHINGTON BORDER. THE EVENT LASTED ABOUT 1 HOUR.

CLOUDS HAVE TO BE CIRRUS, AT LEAST 20K FEET IN THE AIR, WITH JUST THE RIGHT AMOUNT OF ICE CRYSTALS AND THE SUN HAS TO HIT THE CLOUDS AT PRECISELY 58 DEGREES FROM THE OBSERVER, MUCH LIKE LOOKING AT A RAINBOW. 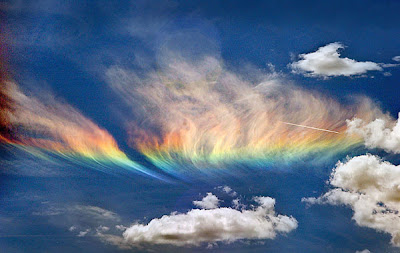 This email forward includes a photograph showing a very colourful cloud formation. The text of the email claims that the photograph depicts a very rare natural phenomenon known as a "fire rainbow". Although some have suggested that the image has been "photoshopped", it is in fact perfectly genuine and so called "fire rainbows" are a real phenomena.

According to an article on the National Geographic News website, this particular fire rainbow was caught on film on June 3 2006 in northern Idaho not far from the Washington State border. A fire rainbow is more technically called a "circumhorizon arc" or "circumhorizontal arc" by weather scientists. Les Cowley from Atmospheric Optics notes:

The term "Fire Rainbow" is not recognised by any atmospheric scientists. I first came across it in a British popular newspaper article after the great Spokane circumhorizon arc display of June 3,2006

To be blunt, it is a very silly and misleading name - the arc is not a rainbow and has nothing to do with fire.

A circumhorizon arc only appears when a specific set of atmospheric conditions occur. The display is caused when light entering hexagonal ice crystals in the clouds is refracted. But, for a fire rainbow to appear, the sun must be very high in the sky, the clouds must be high altitude cirrus clouds and the ice crystals must be shaped like thick plates and aligned with their faces parallel to the ground.

However, the claim in the message that circumhorizon arcs are "the rarest of all naturally occurring atmospheric phenomena" is unfounded. Les Cowley explains:

The arc is rare in northern and mid Europe where these statistics were collected. The reason is that the halo is low at European latitudes and only visible for a week or so around the summer solstice.

The USA is different, the circumhorizon arc is higher in the sky and is visible for a much longer period in the summer and for each day. While a complete arc (it's huge!) might not be seen very often, large and impressive fragments are relatively common and should be seen several times in summer in any one place. In the US and other mid to low latitudes it is maybe 'uncommon' but not 'rare'.

In fact, other arcs such as the Kern arc and the Lowitz arc are much more infrequent. The Kern arc is exceptionally rare and Lowitz arcs are far rarer than circumhorizon arcs.

Another spectacular shot of a circumhorizon arc taken in Canada in 2003 is available on the Atmospheric Optics website.

Thank-you to Les Cowley from Atmospheric Optics for his expert commentary.