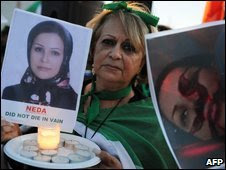 Iranian police have set up a special unit to monitor political websites and fight internet crime.

The head of the unit, Col Mehrdad Omidi, said it would target political "insults and the spreading of lies".

Most opposition websites are already banned, especially those linked to the defeated presidential candidates from Iran's disputed June elections.

But activists continue to set up new websites to keep their campaign alive, as they have no access to state media.

"Given the spread of internet use, police must confront crimes taking place in the web atmosphere," Mr Omidi was quoted as saying in local news reports.

He said the new 12-member "special committee" would monitor the internet and deal with crimes such as "fraud... insults and the spreading of lies".

Iranian experts say the deployment of the new unit is aimed at choking off the opposition campaign.

"Authorities know that the internet is one of the few available channels for the opposition to make its voice heard. They want to silence opposition voices," journalist Akbar Montajabi told the Associated Press news agency.

At least 30 protesters have been killed, thousands have been arrested and some 200 opposition activists remain behind bars.

Three have so far been sentenced to death.