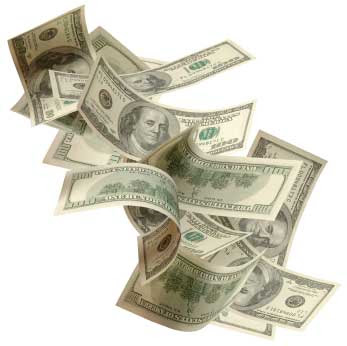 Revamped version of the Microsoft email beta test hoax includes "testimonies" and a bank account screenshot of supposed money received. The message claims that Microsoft will send money to anybody who forwards it to others.

Subject: Fwd: Fw: Please do it - Microsoft Paying u - Not Fake

Frnds I got $2163 today only..
So I am forwading to u frnds
Don't miss this chance
Regards,
Sathish This is really amazing I also got 5000 dollars via DD from HDFC, thot it was fake but it really worked..........the amount has been created to my account, what did you get. Thanks for forwarding this mail

Hey guys !!!
this is cool
really really cooollllll
I forwarded this mail to three chaps just half an hour back and i just forgot about it.. then i saw my salary slip, checked my account in the net. i was wonder stuck to see $30000/- added to my account !! transferred from ms office thru western money transfer !!! its amazing guys !!! Go for it. Act fast. at least before this stupid bill gates gets bankrupt........... and in case this is true, there is not much time left...... so congratulations in advance..... for becoming a millionair so easily... like me....... 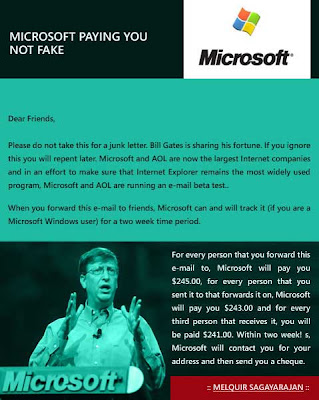 Hey Guys,
Just Thought i could make you all rich I just recieved 458$

I thought this was a scam myself, but two weeks after receiving this e-mail and forwarding it on, Microsoft contacted me for my address and within days, I received a cheque for US$24, 800.00. You need to respond before the beta testing is over. If anyone can afford this Bill Gates is the man.

It's all marketing expense to him. Please forward this to as many people as possible. You are bound to get at least US$10, 000.00. We' re not going to help them out with their e-mail beta test without getting a little something for our time. My brother's girlfriend got in on this a few months ago. When I went to visit him for the Baylor/UT game.

Like I said before, I know the law, and this is for real

Intel and AOL are now discussing a merger which would make them the largest Internet company and in an effort make sure that AOL remains the most widely used program, Intel and AOL are running an e-mail beta test.

When you forward this e-mail to friends, Intel can and will track it (if you are a Microsoft Windows user) for a two week time period.

Within two weeks, Intel will contact you for your address and then send you a check. I thought this was a scam myself, but a friend of my good friend's Aunt Patricia, who works at Intel, actually got a check of $4,54323 by forwarding this e-mail. 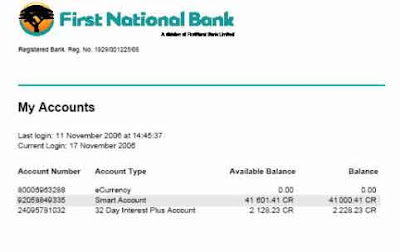 Multiple versions of this tired old hoax have been circulating since at least 1999. The messages claim that Intel and AOL are running an email beta test and that Microsoft will pay you a quite substantial sum of money each and every time you forward the email to others during a two week time period.

These claims are, of course, totally absurd. No such "beta test" is being conducted. Nor has one been conducted at any time in the past. And Microsoft certainly will not give you money just for forwarding an email.

These versions of the hoax sport a series of "testimonies" supposedly added by various recipients who claim to have actually been sent money for forwarding the message. In one newer version, the hoax has been converted into a graphical format, complete with official looking Microsoft logos and even a picture of Bill Gates himself. Another version includes a bank statement screenshot showing an account with over $40,000 credit. The testimonies and screenshot are just rather lame attempts to add a measure of credibility to this foolish hoax. I dare say the testimonies were simply made up by one prankster or perhaps several working together. Since the bank statement does not include information about where the funds originated, it is virtually meaningless.

All versions of this hoax can be traced back to an even earlier hoax that began circulating way back in 1997:

Hello everybody, My name is Bill Gates. I have just written up an e-mail tracing program that traces everyone to whom this message is forwarded to. I am experimenting with this and I need your help. Forward this to everyone you know and if it reaches 1000 people everyone on the list will receive $1000 at my expense. Enjoy.

Considering how long this "beta test" has now been running, even Bill Gates would be bankrupt by now if he was really paying out money for every forwarded email. It is simply ridiculous to suggest that any sane company would even consider participating in such a haphazard and uncontrollable exercise.

Furthermore, in spite of the claims in these messages, there is no reliable or ethical method of tracking who sends a particular email to whom when the message could be expected to be forwarded many thousands of times. Accurately calculating how much money should be sent to how many people would be impossible.

The message claims that recipients have nothing to lose by participating ("Try it, what have you got to lose?"). Well one thing you risk losing is your credibility. Being gullible enough to fall for this one is sure to earn you a degree of ridicule from at least a few of those you forward it to, even if they keep their ridicule to themselves. By sending it onward, you also help to clutter inboxes around the world with one more piece of unwanted email nonsense.
Posted by Shamood at 6:59 PM