Be Ware! Its a Cyber World - - Reality of The Uno - Ben Gulak's Innovative Electric Motorbike

A young inventor has created a motorbike with a twist - it uses two wheels but they are positioned right next to each other, giving it the illusion of being a powered unicycle. And even better, it might help save the planet.

The bizarre-looking contraption has only one switch - on or off - and is controlled entirely by body movement.

The rider leans forwards to accelerate to speeds of 25mph and back to slow down. It has two wheels side-by-side and has been turning heads wherever it has been ridden.

The green machine is so small and light it can be taken indoors and carried into lifts - and is recharged by being plugged into the mains. The wheels are completely independent, allowing the bike to turn on a sixpence and the technology takes the balance and guesswork out of riding a unicycle. 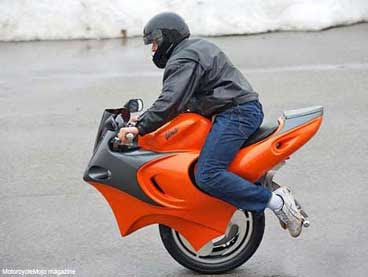 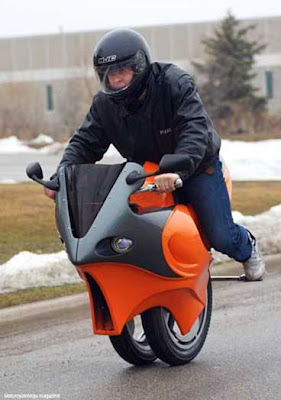 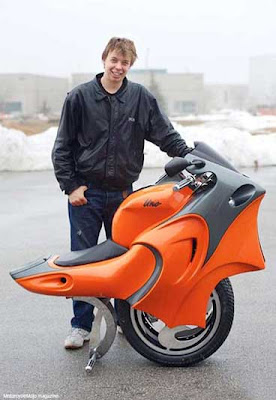 This message discusses the Uno, an innovative type of motor cycle developed by young Canadian inventor Ben Gulak. In contrast to a traditional motorbike design, the Uno has its two wheels side-by-side and is entirely controlled by movements of the rider's body.

Although some commentators have postulated that the message is a hoax and the attached photographs are clever fakes, the Uno is in fact real. A December 2008 New York Times article notes:

Many students at the Massachusetts Institute of Technology look forward to the day they’ll make headlines with an extraordinary invention. But Ben Gulak, a 19-year-old freshman, looks back. He’s the inventor of the Uno, an electric motorcycle that has its two wheels side by side instead of fore and aft, balances using a computer and gyroscope, and maneuvers with a shift of the rider’s body forward, back or sideways.

And the Massachusetts Institute of Technology has also published information about Ben Gulak and the Uno, noting:

The inspiration for the cycle came when Gulak visited China in 2006 and was amazed at the overwhelming pollution that completely blocked the view of the surrounding country as his airplane came in for landing. He realized that much of that smog was coming from the thousands of motor scooters whizzing through the streets and figured that there had to be a better way.

The design he came up with has two wheels mounted side by side, very close together, and powered by electric motors. A computerized control system keeps the vehicle balanced, in a system similar to the Segway personal transporter. But unlike that vehicle, which is ridden in a standing position and is not considered a street vehicle, Gulak's "Uno" is ridden like a motorcycle and designed for ordinary roads.

In 2007, the Uno won a second place Grand Award at the Intel International Science and Engineering Fair. The machine also received a place in the Popular Science 2008 Invention Awards.

Gulag's project received a lot of publicity around the world and he was therefore able to raise capital to fund further development of the Uno and create BPG Motors. Gulag and his team at BPG Motors continue to work towards the goal of offering the UNO for sale to the public. More information about the Uno can be found on the BPG Motors website.
Posted by Shamood at 12:10 AM