According to this email forward, the attached images are photographs of amazing striped icebergs taken in the Antarctic region. At first glance, these images might seem almost too beautiful and spectacular to be genuine and some commentators have suggested that they have been altered in an image manipulation program such as Photoshop or Adobe. However, such icebergs do indeed exist and the photographs are authentic.

The mail spreading over internet looks like presented here below:

Icebergs in the Antarctic area sometimes have stripes, formed by layers of snow that react to different conditions.

Blue stripes are often created when a crevice in the ice sheet fills up with meltwater and freezes so quickly that no bubbles form.

When an iceberg falls into the sea, a layer of salty seawater can freeze to the underside. If this is rich in algae, it can form a green stripe.

Brown, black and yellow lines are caused by sediment, picked up when the ice sheet grinds downhill towards the sea. 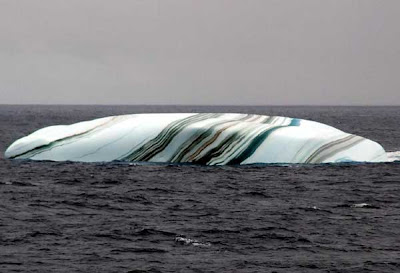 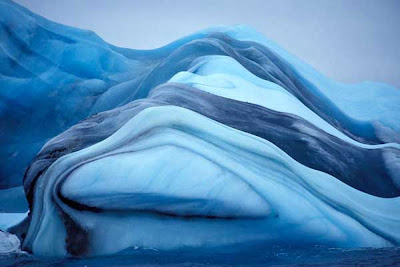 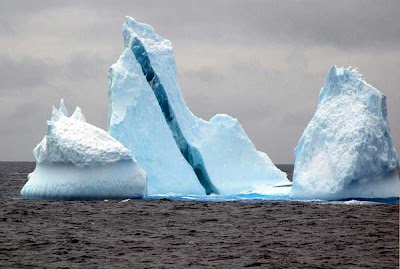 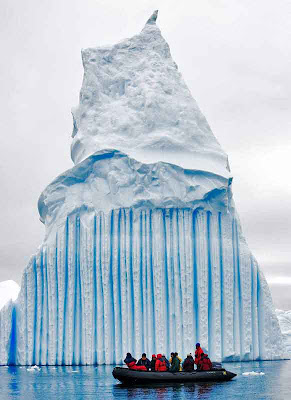 A March 2008 article published in the UK's Daily Mail notes that the photographs were taken by Norwegian sailor Oyvind Tangen from aboard a research vessel. The iceberg photographs were snapped in an area several hundred miles north of the Antarctic. As the message explains, blue stripes are formed as iceberg layers melt and refreeze quickly, while green stripes are created by the freezing of algae-rich sea water. Other coloured stripes, such as black, brown and yellow, were created by sediment collected by the ice as it moved down a hillside towards the sea. The icebergs may have taken hundreds or even thousands of years to form. 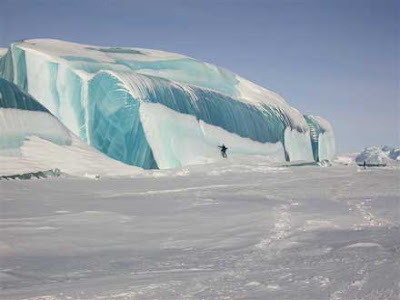 This "frozen wave" variant of the message includes the following description:

Antarctica Frozen Wave Pixs - Nature is amazing! The water froze the instant the wave broke through the ice. That's what it is like in Antarctica where it is the coldest weather in decades. Water freezes the instant it comes in contact with the air. The temperature of the water is already some degrees below freezing. Just look at how the wave froze in mid-air!!!

These photographs are also authentic, but the accompanying description is false. The images do not show waves somehow instantly frozen in place. Instead, they show ice formations created by glaciation, melting and refreezing, and other natural forces, over very long periods of time. The "ice wave" photographs are not related to the striped iceberg images and were taken at a different time and place by a different photographer, scientist Tony Travouillon.