Message circulating via email and the Internet claims that recipients can print out an attached coupon to receive a free burger from gourmet burger chain, Red Robin.

In fact, the email containing this coupon is absolutely fake and the official website of Red Robin has already published an alert that the coupons are fraudulent and that they will not be fulfilled. 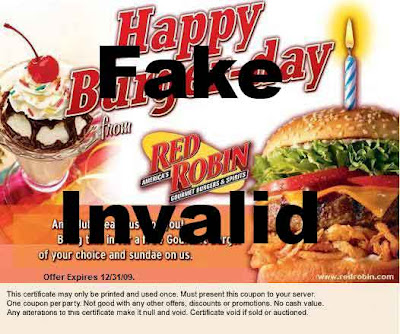 This coupon, which is circulating via email and has also been posted to numerous websites, blogs and social networking sites, can supposedly be redeemed for a free burger and sundae at Red Robin stores. Red Robin is a gourmet burger chain that operates in various locations in the United States and Canada. Information on the coupon claims that recipients can print out a copy and take it to a Red Robin store to receive their free food.

As it is mentioned earlier; however, the coupon is bogus and was not issued by Red Robin. The company has published the following alert on its website stating that the coupons are fraudulent and that they will not be fulfilled.
Notice Regarding Fraudulent Coupon Offer
A fraudulent Red Robin coupon offering a free Gourmet Burger and sundae has been circulating via the internet and email, and also has been distributed in a printed version by a variety of unauthorized sources. Red Robin does not sponsor or endorse these fraudulent offers and Red Robin restaurants will not fulfill any offers appearing in deceptive or fraudulent coupons.
Pranksters quite regularly create fake coupons, vouchers or offers and distribute them via email and the Internet. The promise of free products or services is enough to fool many recipients into passing on such hoaxes to others in their contact list or sharing them via blogs and social networking websites. During 2008, another burger chain, In-N-Out Burgers, became the victim of an Internet rumour that falsely claimed that the company was offering heavily discounted food on a particular day. And in 2007, UK retailer, Marks & Spencer was inundated with customer enquiries after a widespread email forward fraudulently promised vouchers worth up to £500 for those who sent the message to a specified number of others.

While some Internet based offers are perfectly valid, in is not uncommon for giveaway offers that circulate via email and online to be fake. It is wise for Internet users to take all such offers with a grain of salt until other legitimate sources, such as information on the company website, confirm the validity of the supposed offer.
Posted by Shamood at 10:26 PM