A beautiful photograph of desert wildflowers is circulating via email and online.

Some may have doubted on the photograph's authenticity; as it is extremely beautiful and rare to be original yet it is a genuine and real photograph. Before heading towards more detailed explanation and fact findings; just go through the following mail and related photograph:

Desert Flowers on the east side of the Carrizo plain, in the Temblor Range (about 50 miles due west of Bakersfield).
(Author and Photographer unknown) 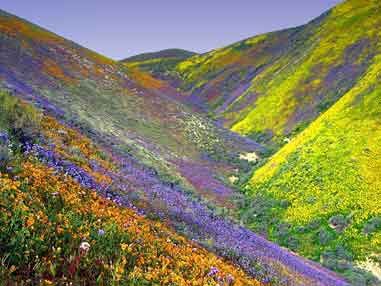 This wonderful photograph is currently circulating via email. It is also a popular topic for forum and blog posts. The image circulates with various titles, including, "God Spilled the Paint", "The Day That God Spilled the Paint" and "God's Paint Spill", Perhaps because of the almost unbelievable beauty of the scene depicted, some have cast doubt on the photograph's authenticity.

However, the photograph is genuine. Research reveals that it was taken in 2005 by photographer and nature lover Frankie Kee. During 2005, the photo was featured on the DesertUSA website.

Mr Kee captured the scene in Mar 2005 at the Tremblor Range near the Carrizo Plain National Monument in California.

While the caption on this example claims that the photographer is "unknown", other versions have attributed the image to "Barbara Mathews". However, I have found no evidence to support this claim and I have no reason to doubt that Frankie Kee is indeed the photographer who took the picture.

Copies of the photograph are available for sale on Frankie Kee's website.
Posted by Shamood at 5:41 PM