Email claims that an attached photograph shows a flower in Mexico that is the largest in the world and only blooms once every forty years for four days.

This flower in Mexico only blooms once every 40 years for 4 days. How magnificent is God's creation!

The largest flower in the world is blossoming in the mountainous region of Rio Blanco, Veracruz, Mexico . Two meters high, it has the peculiarity of blooming only during four days every 40 years. 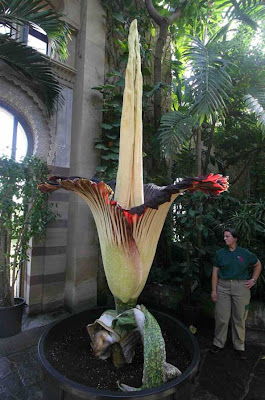 This email forward claims that an attached photograph depicts a flower growing in mountains near Rio Blanco, Veracruz, Mexico that is the largest in the world and only blooms once every forty years for four days.

However, while the image itself is genuine, the email is inaccurate in its description of the flower. The flower shown in the image - Amorphophallus titanum or Titan Arum - is indeed considered the largest in the world. Also known as the "Corpse Flower" because of its foul smell, Amorphophallus titanum is a prized addition to a number of well-known botanical gardens around the world, including London's Kew Gardens, California's Huntington Botanical Gardens and Sydney's Royal Botanic Gardens.

The plants have become quite famous and always attract large crowds when a particular specimen blooms at one of the above locations or at a number of others gardens around the world. One such plant was also featured in Sir David Attenborough's outstanding BBC documentary The Private Life Of Plants.

However, while specimens of the Corpse Flower may exist in gardens in Mexico, the plant certainly does not grow wild in that country as implied in the email. In fact, the native habitat of Amorphophallus titanum is the rainforests of Sumatra, Indonesia.

Moreover, the photograph of the Titan Arum included in the message was not taken in Mexico. The photograph was actually taken at Stuttgart, Germany's Wilhelma Botanical and Zoological Gardens by Lothar Grünz in October 2005.

The same photograph along with details about where, when and by whom the picture was taken, is available on the Wikimedia Commons website. And, another shot published on the Wilhelma website clearly shows the same building in the background as that shown in the above photograph.

While bloomings of the Amorphophallus titanum are certainly rare, and the flowers only last for two or three days, it is not true that they only bloom once every forty years as claimed in the message. The specimens kept in various botanical gardens often go for several years between blooms. However, the plants are not set to a forty year blooming cycle and many specimens have bloomed much more regularly. In "The Private Life Of Plants", David Attenborough suggests that Amorphophallus titanum in the wild bloom about once every 1000 days.

Thus, it seems clear that an unknown prankster has simply taken the picture of the Wilhelma Titan Arum and tacked on some fanciful information about Mexico and a fictitious forty year bloom cycle.
Posted by Shamood at 10:44 PM