Actually, this is a genuine photograph og huge bunch of bananas. 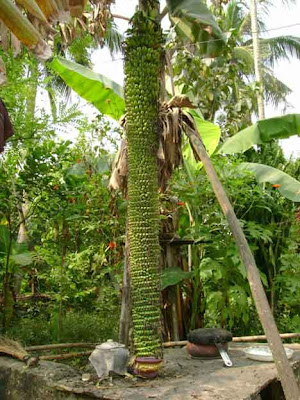 This photograph depicting an exceptionally large bunch of bananas is circulating via email and has also been posted to numerous blogs and forums. Some commentators have suggested that the image has been manipulated.

However, there is no reason to suspect that the photograph is not genuine. The photograph almost certainly depicts a type of banana that has the binomial Musa chiliocarpa and can be found in various parts of South East Asia. The plant goes by a variety of common names including Pisang Seribu and Thousand Fingers. The banana inflorescence (flowering stalk) of Musa chiliocarpa often continues to grow until it reaches the ground, producing large numbers of small bananas. Although small, these bananas are reportedly sweet and pleasantly flavoured.

A Google Image search reveals that there are many other photographs of this banana variety available online.
Posted by Shamood at 7:12 PM