Beware! It's a Cyber World - - Summary:
A recently circulating message that claims to show recipients how to detect fake $50 Australian Banknotes. The message suggests that fake notes can be determined by a missing name under a portrait and by the order of signatures.
According to our postmortem of the said message, the information in the message is false. Depending on their year of issue, some legitimate banknotes do not have a name under a portrait. Also depending on their year of issue, some legitimate banknotes may have signatures in different orders. The information in the message is not a valid method of detecting a counterfeit note and it should not be forwarded to others.
Let's have a look to the contents of the mail and photographs of alleged fake banknote. As the mail contains only jpg format of the photographs and the text written on it; therefore, we present here the text written on the photographs for reader's convenience. The text can be read as:
Please check that the name is on the note. The name should be: EDITH COWAN Please confirm the signatures on the notes.Governor on top should be STEVENS. Treasury on bottom should be: Henry 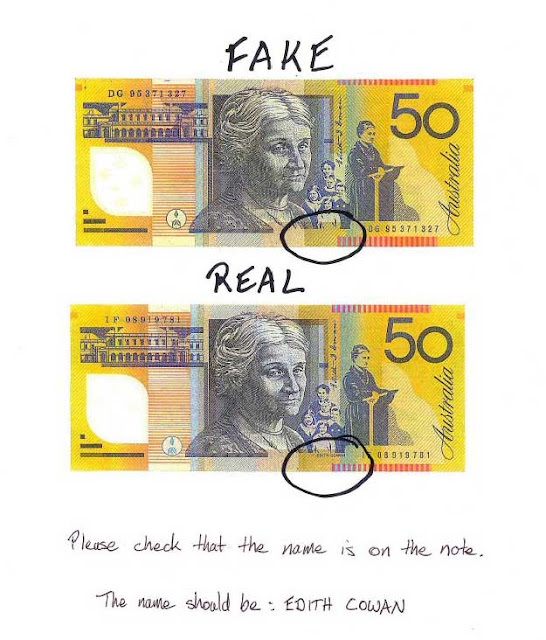 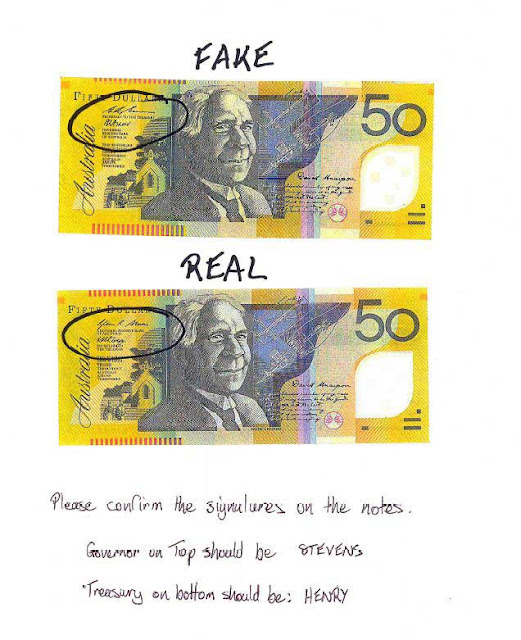 =========================================================
Beware! It's a Cyber World - - Explanation:
A message that is currently circulating, mainly in the form of a .pdf email attachment, supposedly offers advice on how to recognize counterfeit $50 Australian banknotes. The message, which features images supposedly showing fake and real banknotes placed beside each other for easy comparison, includes helpful "tips" about how to detect a counterfeit bill. According to the message, recipients should watch out for $50 notes on which the name "Edith Cowan" does not appear under her portrait. It also claims that another indication of a fake note is if the Secretary to the Treasury's signature appears above that of the Governor.

The Reserve Bank of Australia has become aware of claims that the authenticity of a banknote can be determined by whether it has a name printed under its portrait or by the order of the signatures. This information is false.

A banknote without the name of the person printed underneath the portrait is not necessarily counterfeit. Printed names were added to Australian banknotes from 2002. This was done to help the public identify the people that our banknotes feature. Genuine banknotes produced prior to the addition do not have printed names.

These changes were design changes only and should not be used to determine the authenticity of a banknote. Members of the public are encouraged to consult the guide on Counterfeit Detection for an explanation of the characteristics of genuine Australian banknotes.

Because many fifty dollar notes printed prior to 2002 are still in circulation, the false information in the message has caused a number of Australians to incorrectly conclude that they have received a counterfeit note. The rumour gained even more momentum after radio host Neil Mitchell aired the bogus "counterfeit indicators" on his radio program. A December 3, 2010 article in Albury-Wodonga news outlet "The Border Mail" reports:

BORDER businesses were barking up the wrong tree after finding “counterfeit” $50 notes.
McDonalds in Lavington and Todd’s Tasty Treats reported suspect notes to police on Wednesday after hearing a segment on 3AW Mornings, which is broadcast through 2AY.

Albury police inspected the notes and said they were authentic.

Thus the information in the message is highly inaccurate and misleading and certainly should not be forwarded to others. Sending on such misinformation may cause unnecessary confusion and distress in the community and waste the time of police and bank staff who must field ongoing enquiries about banknotes mistakenly identified as counterfeit.

However, it should also been noted that, at the time of writing, some fake fifty dollar notes may indeed be circulating in Australia. A November 25th RBA news release reports:

On 24 November, the Australian Federal Police and NSW Police seized a quantity of $50 counterfeit Australian banknotes. Several associated arrests were also made. The counterfeits that have been seized are a good quality reproduction of a banknote. However, they can be identified as counterfeits by checking the security features. The overall rate of counterfeiting in Australia remains very low by international standards. It is, nevertheless, important that people are aware of security features on banknotes, so they are able to identify a counterfeit in the unlikely event they receive one.

These counterfeit notes are reportedly softer and lighter than genuine notes, and the stars of the Southern Cross found on the note's translucent window can be scratched off with fingernails.
Posted by Shamood at 5:46 AM