My readers my remember an article regarding Images Of Strange Mermaid Found On Beach of Malaysia. The recent images are also an artistic sculpture work of the same artist Juan Cabana.

Subject: FW: It was found on Tampa Bay beach - what the heck is it? 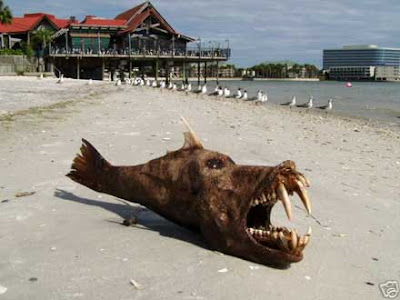 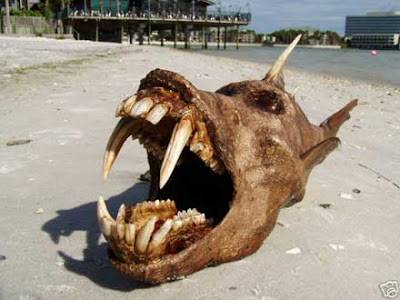 The email arrives with several other images of the same creature.

Photographs of this strange and fierce looking creature have been circulating via email and online since mid 2006. The images have generated a lot of discussion. In fact, our oceans do indeed contain some strange and wonderful species, therefore, many of us have assumed that the creature might be a deep-sea fish till now unknown to science.

In fact, the "creature" is a sculpture by Tampa Bay artist Juan Cabana. Mr Cabana has created an entire range of mermaids, sea monsters and aliens, some of which he offers for sale on eBay under the name "seamystery". This particular "Sea Monster" was the subject of an eBay auction in June 2006. The same photographs that are now circulating were included in the eBay description of the item.

Cabana does not specifically state that his creatures are sculptures in his eBay descriptions. Instead, he creates fictional cover stories to go with the sculptures that include such information as how and where the particular creature was supposedly washed ashore and subsequently discovered. In a Small WORLD PodCast interview, the artist claims that he gives the items a cover story to create excitement about the sale and add an element of fun. He says that he at first made clear in his auction listings that he had actually made the objects but that approach "seemed like it was boring". Adding a story, he says, generates a lot more excitement. He assumes that most potential buyers will understand that the stories are tongue in cheek. Within the context of their original eBay listings, this assumption is not unreasonable. However, when the pictures and stories "escape" into cyberspace and get passed around out of their original context, they are apt to deceive many recipients. It should be noted that the images are taken from the ebay listings and distributed via email without Mr Cabana's permission or knowledge.

Although his works may not be to every body's taste, Cabana really is a talented sculpture. His bizarre but very lifelike creations are quite outstanding. The artist uses a variety of materials including fish and animal skin, animal skulls, steel and plastic.
Posted by Shamood at 9:01 AM