Email forward claims that a series of attached photographs show a very colourful and spectacular display created by many varieties of algae and moss growing on an isolated river at a certain time of year.

Subject: FW: The Most Colourful River In The World

The river that ran away to paradise -

During a brief span between wet and dry seasons, when the water level is just right, the many varieties of algae and moss bloom in a dazzling display of colors.

Without any roads leading to this river, it must be accessed by horse. 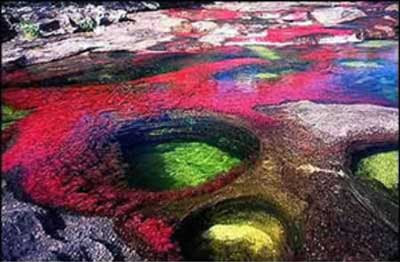 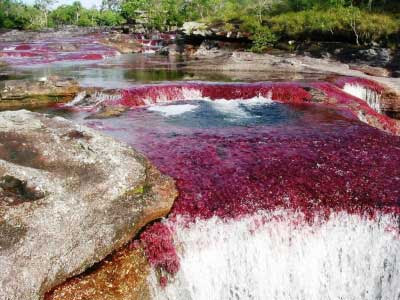 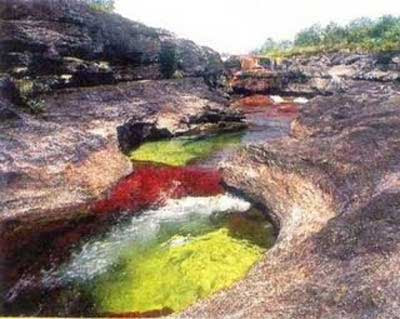 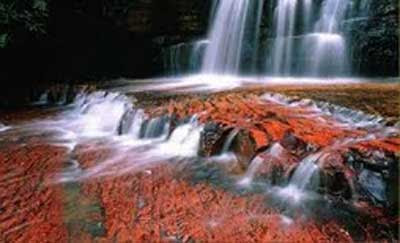 According to this email forward, an attached series of photographs depict an unnamed river made spectacularly colourful by the blooming of different coloured algae. The message suggests that the river is the most colourful in the world and notes that the algae display only occurs for brief periods when water levels and climatic conditions are optimal.

The information in the message is factual and the photographs are genuine. The river shown in the photographs is the Caño Cristales, which is located near the town of La Macarena in Columbia, South America. The river, world famous for its colourful display, has been called "the river that ran away to paradise", "the most beautiful river in the world" and "the river of five colours". Information about the river published on the Atlas Obscura website notes:

During Colombia's wet season, the water flows fast and deep, obscuring the bottom of the river and denying the mosses and algae that call the river home the sun that they need. And during the dry season there is not enough water to support the dazzling array of life in the river. But during a brief span between the wet and dry seasons, when the water level is just right, the many varieties of algae and moss bloom in a dazzling display of colors. Blotches of amarillo, blue, green, black, and red - and a thousand shades in between - coat the river.

As noted in the message, the part of the river where the colourful blooms occur is quite isolated and is not accessible by road. Adventurous tourists can now fly into La Macarena and then make their way to to the river site on foot as part of guided tours. The site was effectively closed to tourists for several years because of FARC guerrilla activity in the region along with concerns about the impact of unregulated tourist traffic. However, the site was reopened to visitors in 2009. The Colombia Reports website notes:

The Caño Cristales site, located about two hours walk from the town of La Macarena, will be open to visitors until November 10, when the summer season dries out the algae and the river loses it magnificent colours.

So far, some 1,000 people have visited Caño Cristales, including around 100 foreign tourists.

According to new regulations visits to the site are made up of groups of up to 20 people, taken throughout the day by four guides. The tours will follow four clearly marked and authorized paths and one is no longer permitted to stay overnight or cook, as this was ruining the area previously.

Even so, reports indicate that some intrepid visitors still made it to the river during the years it was officially closed to tourists.

Many other photographs of the river in all its glory have been published on various travel blogs and photo sharing websites. The following Youtube posting depicts an excursion to La Macarena and Cano Cristales:
Posted by Shamood at 4:54 AM