Beware! It's a Cyber World - - Summary:
Widely spreading stories, on internet and web, state that researchers at Search for Extraterrestrial Intelligence (SETI) have spotted three gigantic spaceships that are currently heading towards Earth and will reach in 2012. 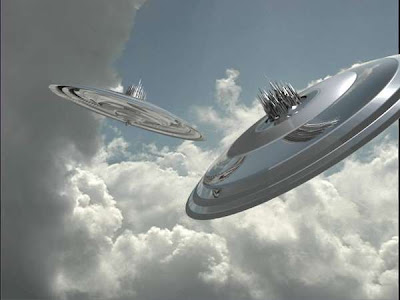 Reality is the claims in these stories are complete rubbish. The Search for Extraterrestrial Intelligence (SETI) has refused any knowledge of such an event and has definitely not released a report about the future arrival of any alien spaceships. Moreover, there is no credible evidence of any kind to support the claims. The rumours began circulating after a story about the supposed alien invasion was published on Examiner.com and then subsequently in Russian news outlet Pravda in December 2010.

It is about time science should say its word regarding the problem, and it did. SETI (Search for Extraterrestrial Intelligence), an independent non-commercial organization, released a sensational statement.

Three giant spaceships are heading towards Earth. The largest one of them is 240 kilometers wide. Two others are smaller. At present, the objects are beyond the orbit of Pluto.

The spaceships were detected by HAARP search system. The system, based in Alaska, was designed to study the phenomenon of northern lights. According to SETI researchers, the objects are nothing but extraterrestrial spaceships. They will be visible in optical telescopes as soon as they reach Mars's orbit. The US government has been reportedly informed about the event. The ships will reach Earth in December 2012.

A report by the Search for Extraterrestrial Intelligence (SETI) in the United States said that there are three giant spaceships which are heading towards Earth.

According to the Russian Pravda news, the SETI, a non-commercial organization said that the largest one of the three spaceships is 240 kilometers wide, and the two others are smaller.

It further stated that currently, the objects are beyond the orbit of Pluto and will reach Earth in December 2012.

The report claims that the spaceships were detected by the HAARP search system, based in Alaska, which is designed to study the phenomenon of northern lights.

According to the SETI researchers the objects are nothing but extraterrestrial spaceships, and will be visible in optical telescopes as soon as they reach Mars’ orbit, reported the Pravda news.

Beware! It's a Cyber World - - Explanation:
According to stories that are rapidly circulating via email, blogs and social networks, researchers have discovered that three massive alien spaceships are on their way to Earth and are set to arrive in December 2012. The stories claim that the information came to light via a report issued by the scientific organization SETI (Search for Extraterrestrial Intelligence). Some versions claim that the impending alien encounter was announced by SETI Astrophysicist Craig Kasnov. Others suggest that the spacecraft were detected by the HAARP search system in Alaska. The reports suggest that the arrival of the aliens will coincide with the end of the Mayan calendar, an event that many believe will herald the end of civilization or at least the beginning of a time of chaos and change.

However, the claims in the stories are utter nonsense and have no factual basis. The SETI Institute certainly did not issue any such report, nor does it have any connection whatsoever with the outlandish claims made in the messages. Moreover, the Institute does not have an astrophysicist named Craig Kasnov. I contacted the SETI Institute to enquire about the rumours. A spokesperson from the SETI Institute sent the following reply:

Furthermore, the High Frequency Active Auroral Research Program (HAARP) has not issued any reports about the detection of alien spacecraft, giant or otherwise. HAARP has no connection to the SETI Institute as implied in some versions of the story.

It seems that the stories began circulating after an article about the supposed alien spacecraft was published on the website Examiner.com on December 8, 2010. Content on Examiner.com is contributed by users that "come from all walks of life and contribute original content to entertain, inform, and inspire their readers". The spacecraft story was submitted by "UFO Examiner" Andrew Wozny. Wozny also writes for the New World Order Information Center blog which features an entire UFO category. Given that there is no Craig Kasnov at the SETI Institute and the institute issued no such report, it is clear that Wozny simply made up the story. Writer Phil Plait who has published an article thoroughly debunking Wosny's story on the Bad Astronomy blog points out that the blue "spaceship" in the picture shown in the Wosny piece is nothing more than an image defect.

The story was later taken up by Russian news outlet Pravda, who published a version of the article titled "Three giant spaceships to attack Earth in 2012?" on 22nd December 2010. Korean news outlet the Korea Herald then published an article largely based on the Pravda story on 29th December 2010. Other Asian news outlets also published versions of the story. Since then, the story has been posted to many blogs, forums and social networks and also circulates in an email version.

The fact that the absurd tale has been taken up by supposedly reputable news outlets, has given it a degree of totally undeserved credibility. The story is certainly entertaining, but it is entirely fiction and concerned recipients need not watch the skies in trepidation. While the truth IS undoubtedly "out there", this silly story ain't it.

Do you have any information concerning the photos of the "three ships"?I typed in the coordinates on the site and saw them.Thanks.

Are these 3 ships for real? Havent seen any updated information on it.

You really beleave in SETI; they barely have politcal powe to keep their jobs; they are a front for desinformation, wanna see eomething nice chech what Paul Hellyer, former Canadian Minister of Defense has to say about it: http://otaodojoao.blogspot.com/

If their technology would be that advanced, they would have wipes us out ages ago.

There is just one fact to be drawn from those supposed "ATTACKS".
It shows that our own goverments (illuminati/kabal) are capable of doing something like that. They would be the one who would kill us.

It is the thought that counts.