Recently circulating message claims that attached images depict a K-7, an exceptionally large aircraft built in Russia during the 1930's.

In fact, the K-7 was a real aircraft that was indeed designed and built during the 1930's in Russia. However, the images that come with the message are only an artist's rendition of the aircraft. They make the aircraft appear much larger than it really was. The images are not accurate depictions of the real aircraft.

First have a look to the following mail and images circulating via emails; then we'll proceed towards the detailed analysis:

Subject: K7 heavy bomber The most amazing airplane in History.....

Built in Russia during the 1930s, it flew 11 times before crashing and killing 15 people.

The designer, Konstantin Kalinin, wanted to build two more planes but the project was scrapped. Later, Stalin had Kalinin executed. Evidently, it was not good to fail on an expensive project under Stalin.

It's got propellers on the back of the wings, too. You can count 12 engines facing front. The size would be equivalent to the Empire State Building on its side, with cannons. And you think the 747 was big... not only a bunch of engines but check out the cannons the thing was carrying.

In the 1930s the Russian army was obsessed by the idea of creating huge planes. At that time they proposed to having as many propellers as possible to help carrying those huge flying fortresses into the air, jet propulsion has not been invented yet.

Not many photos were saved from those times because of the high secrecy levels of such projects and because a lot of time has already passed. Still, on the attached photos you can see one such plane - a heavy bomber K-7.

The rather compelling images that come with this widely circulated message are said to depict the "K7", an exceptionally large aircraft built in the Soviet Union during the 1930's. The description that accompanies the images notes that the aircraft was designed by Russian aviator Konstantin Kalinin. According to the message, the aircraft crashed on its eleventh test flight killing 15 people. While these claims are true, other information in the message is less factual. Moreover, the images that come with the message are not photographs but rather an artist's renditions of how one of these aircraft might have looked. And the person who created these renditions used a considerable amount of "artistic licence" in his or her work. 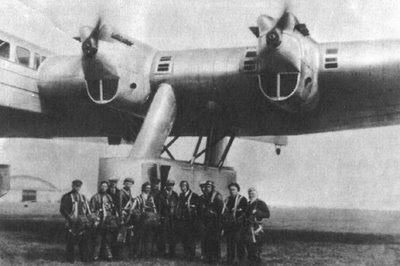 A photograph of the real K7. This plane is obviously much smaller than the one depicted in the above images
While the K7 was certainly large, these images depict an aircraft much larger than the one that was actually built. The images also show a plane with more engines - 12 rather than the actual 7 - and considerably more firepower than the original aircraft. A Wikipedia entry about the K7 lists the following specifications as does modeller's website, Fiddlers Green :

Reports suggest that the plane's designer Konstantin Kalinin was indeed executed as an "enemy of the state" in 1938 during one of Stalin's purges. However, it is unclear if Kalinin's fate was a direct result of his involvement with the K7 project as suggested in the message.

The images that come with this message are only 3 in a longer series of artist's renditions depicting the plane. As shown below, others in the series are even more fanciful and depict the K7 in a close encounter with an even more outlandish aircraft: 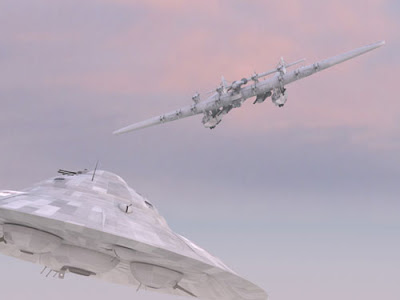 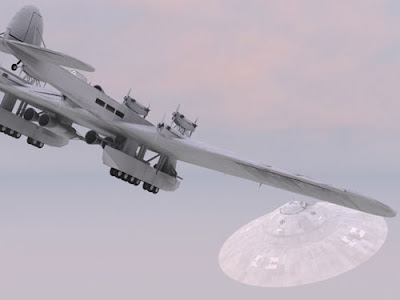