Circulating message claims that 9-year-old Michael Verster is missing from his home in Pinetown, South Africa.

As a result of careful and detailed investigation; foound that the information in the message is true. Nine year old Michael Verster went missing in Pinetown, South Africa on 28th April 2010. Michael was last seen getting into a car outside his school soon after his mother dropped him off. If you have any information about this case, please contact South African Police. Contact details are provided on the flyer included below.

Subject: FW: Missing Boy Michael Verster 9 yrs KZN this is not a hoax and he has not been found yet!

Before I sent this out today I actually phoned the number on the flyer for Pine Town Police and I was told that yes Michael Verster is definitely still missing and I was asked if I could please send this out. 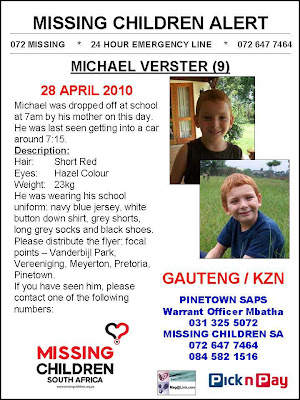 Beware! It's a Cyber World - - Explanation:

A missing child alert for 9 year old Michael Verster is currently circulating via email and social networking websites. The information in the alert is true. The alert generally takes the form of an attached flyer that contains information about the case along with photographs of Michael and police contact details. The flyer notes that Michael Verster, of Pinetown South Africa was last seen getting into a car outside his school soon after his mother dropped him off for the day.

An 18th May 2010 Newswatch item on Durban's EastCoastRadio website notes:

It has been an agonizing 21-days for a Durban woman.

Her son, 9-year-old Michael Verster, has been missing since someone picked him up outside school at Pinetown 15-minutes after she had dropped him off.

The report also notes that police have no solid leads in the case.

Another May 18 news report about the case published on the TimesLive website reveals that the missing boy's parents are involved in a custody dispute. The article notes:

"Someone from the school called to tell me Michael was not in class and that his friends saw him willingly jump into a car with a white man shortly after I had dropped him," she said.

She is convinced that her child's abductor is not a stranger: "Michael would never go near a stranger," she said.

The police widened their search to Vereeniging, Meyerton, Pretoria and Vanderbijlpark when they discovered that the boy's father, whom Monique and the police refused to name, lives in Gauteng.

Warrant Officer Mazwi Mbatha said the boy's father had told police he did not know where his son was.

If you have any information about Michael Verster's disappearance or whereabouts, please contact the South African Police Service (SAPS) via the contact details on the above flyer.
Posted by Shamood at 8:16 PM