Message purporting to be a "winning notification" from international football association FIFA, claims that the recipient has won two million eight hundred thousand dollars in the FIFA 2010 World Cup Lottery.

The cyber culprits always try to reap the benefits from the big events like 2010 FIFA World Cup in South Africa. In the last month; an article was posted here at 'Beware! Its a Cyber World'; alerting internet users that cyber crimes are on the rise as the FIFA World Cup is approaching.

In fact, this email message is also a part of that cyber crime wave which is not from FIFA and the supposed lottery does not exist. The message is a scam designed to trick recipients into sending money and personal information to Internet Criminals.

We are pleased to announce to you as one of the 3 lucky winners in the FIFA 2010 AWARD draw held on March 31ST 2010. All 3 winning addresses were randomly selected from a batch of 5,000,000 international emails. Your email address emerged alongside 2 others as a 3rd category winner in this month's draw.

Consequently, you have therefore been approved for a total pay out of $2, 800,000, 00 USD (Two Million Eight Hundred Thousand United State Dollars) only.

CONGRATULATIONS!!!
At your disposal, I remain.
Yours in service,

Once again on behalf of all our FIFA 2010 TEAM,
CONGRATULATIONS!!!

N.B:
1. All claims are nullified after 10 working days from today.
2. Your Ref number must be in all your mails with the claims officer.
3. Do inform the claims officer of any change of names or addresses.
4. All winners under the 5. Please contact your claims agent by fax or email (Mrs. Deborah Gray).FIFA 2010 ENGLAND. 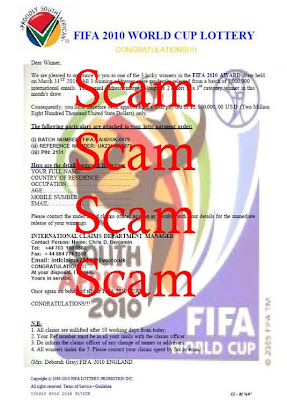 This email is supposedly an official prize notification from world football governing body, FIFA. The email claims that the "lucky" recipient has won a substantial cash prize in the FIFA World Cup Lottery. The recipient is instructed to contact the "claims agent" listed in the message and provide personal details in order to arrange the "immediate release" of the winnings.

However, the message is not from FIFA and neither the prize nor the FIFA 2010 World Cup Lottery itself actually exist. In fact, the message represents just one more variant of an advance fee lottery scam that has been successfully used by criminals for many years. Those who contact the "claims agent" as instructed will soon be asked to pay various fees that are supposedly required to allow the release of the "winnings". The criminals responsible for the scam will claim that these payments are necessary to cover taxes, insurance costs, delivery expenses and a host of other totally fictitious fees. The scammers will insist that for legal or insurance reasons, the fees cannot be deducted from the actual winnings and must be paid in advance. If the fees are not paid, they will claim, the "winner" will forfeit his or her right to the prize money. But, of course, there is no prize and any money sent by the victims will be pocketed by these canny scammers. Once a victim falls for the scam and sends money, requests for more and more bogus fees are likely to continue until the victim belatedly realizes that he or she is being conned. During the course of the scam, the criminals may also fool their victim into supplying a large amount of personal information that may subsequently be used to steal his or her identity.

In order to make their scam message seem a little more credible, the scammers responsible for this message have rendered it in the form of an official-looking PDF document complete with seemingly genuine FIFA logos, trademarks and formatting. The logos and graphics used in the scam message are no doubt stolen or copied from official FIFA websites and publications.

Scammers are always quick to exploit events of international significance in order to further their own nefarious ends. And the 2010 FIFA World Cup - to be held in South Africa in June and July - is certainly no exception. The above example is only one of a number of advance fee style scams that have been submitted to me over the last few months that base their bogus cover stories around the impending World Cup. Such scam attempts are likely to continue.

Internet users should be very cautious of any unsolicited emails that claim that they have won a large prize in a promotion that they have never even entered. No legitimate organization is ever likely to run a promotion or prize draw in such a manner. Scammers often claim that the recipient's email address or name has been collected online and randomly selected as the "winner". Genuine lotteries do not operate in such a manner. If you receive such an email, do not reply to the "agent" as instructed. Do not send money or personal information.
Posted by Shamood at 8:42 PM