Message claims that L.P.C. Electronics is giving away Sony Vaio Laptop to recipients who forward the email to twenty other people.

DO YOU WANT A FREE SONY VAIO LAPTOP?

L.P.C. Electronics is giving away free laptops as part of a new promotion. This is a campaign to increase the popularity and sales.

You are 100% guaranteed to win a free Sony Vaio Laptop VGN-AW270 if you send this email to 20 other people. The stock for these laptops is limited so make sure to send out the emails as fast as possible.

Forward a copy along with verification to: [Address removed} You will receive an email with more information: Kind Regards,
Eve Gibson [IT Manager L.P.C.]

It's for real, I just received it!!

Note: The hoax normally circulates in the form of the following graphic: 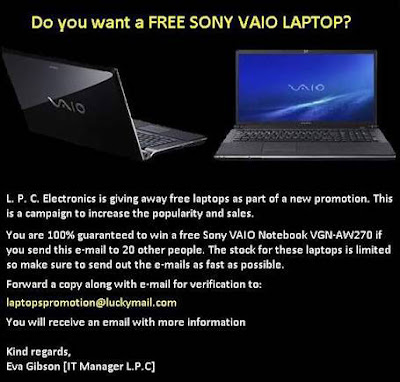 Be Ware It's a Cyber World-Explanation:
This message claims that, just by forwarding the email to 20 other people, the lucky recipient is 100% guaranteed to "win" a free Sony Vaio Laptop VGN-AW270. According to the message, a company named L.P.C. Electronics is giving away the laptops as part of a promotional campaign to increase popularity and sales.

However, the claims in the email are untrue. L.P.C. Electronics is not giving away free laptops in exchange for sending on an email. Nor is any other company. In fact, the email is just one more incarnation in a long line of similar hoaxes. The message is very similar to an earlier email hoax that falsely claimed that Sony Ericsson was distributing free laptops to those who forwarded the message: 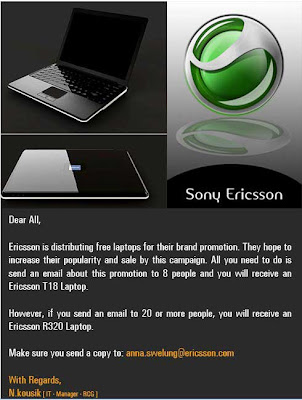 And the Sony Ericsson laptop hoax email was in turn just a mutated version of an even earlier hoax that claimed that Sony Ericsson was giving away free mobile phones. Other versions of the hoax have claimed that Nokia was the company distributing free phones in exchange for forwarding. And one mutation of the hoax even claimed that the recipient could get a free power inverter just for sending on the message.

There are several businesses that trade under the name "L.P.C. Electronics", located in various parts of the world including the United States, Australia and India. It is unclear which of these, if any, is being targeted in this version of the hoax. It is possible that the name was simply made up for the occasion by the pranksters responsible for generating this particular variant of the hoax. Emails sent to the address included in the hoax message have so far gone unanswered.

In truth, any message that claims that a company is giving away products, services, gift vouchers or cash to those who forward on a specified email is virtually certain to be a hoax. No legitimate company is ever likely to engage in a promotion that is reliant on the random and uncontrolled forwarding of an email. While companies regular use prizes and giveaways as part of their promotional campaigns, such promotions will invariably be tightly controlled via specific terms and conditions and entry cutoff dates.

The "get something free just for forwarding an email" is a favourite ruse of Internet pranksters and has been the engine driving the spread of a large number of absurd, inbox cluttering junk email since the early days of the Internet. One of the most prolonged of these hoaxes has been the infamous Money from Microsoft hoax which claims that Bill Gates is paying considerable sums of money to those who participate in a "beta test" by forwarding an email to as many people as possible. This hoax has circulated continually for at least a decade.

As a rule of thumb, if a message claims that you can receive a free giveaway just for sending on an email, it is very likely to be just another hoax in a long and sorry line of similar hoaxes and should be deleted rather than forwarded.
Posted by Shamood at 7:53 PM