Email forwarded supposedly contains a copy of a confidential inter-office memo in which a McDonald's manager advises staff to deliberately leave out products from customer orders as a means of increasing profits. 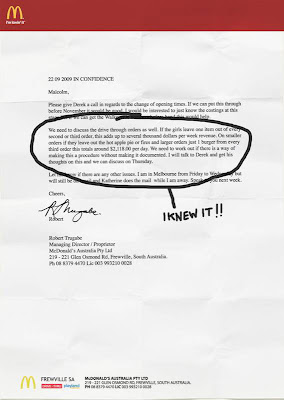 Commentary:
This widely circulated email supposedly contains a copy of a confidential memo in which a senior McDonald's manager named "Robert Trugabe" suggests that serving staff deliberately leave out items from customer orders as a means of increasing company profits. The memo, which is written on seemingly official McDonald's stationary, contains the following staff advice:

We need to discuss the drive through orders as well. If the girls leave one item out of every second or third order, this adds up to several thousand dollars per week revenue. On smaller orders if they leave out the hot apple pie or fires [sic] and larger orders just 1 burger from every third order this totals around $2,118.00 per day. We need to work out if there is a way of making this a procedure without making it documented.

Thank you for your email. This memo is a complete fabrication. 'Robert Trugabe' is not a McDonald's Australia employee and never has been. Needless to say the contents of the letter are also completely fabricated. McDonald's practices the highest standards of consumer ethics and would never encourage employees to act in a way that undermines our core customer values.

McDonald's Australia has also published the following customer alert on its website:

The memo in circulation online and via email supposedly written by the Managing Director/Propietor of Frewville McDonald's in South Australia is a complete fabrication. 'Robert Trugabe' is not nor has even been a McDonald's Australia employee. The contents of the letter are also completely fabricated. McDonald's practices the highest standards of consumer ethics and would never encourage employees to act in a way that undermines our core customer values.

An examination of staffing information published on the McDonald's website confirms that there is no managing director named "Robert Trugabe". The name is seemingly a pun on the name of Zimbabwean dictator "Robert Mugabe".

Certainly, big companies can often be quite unscrupulous in their endeavours to maximize profits. However, it is absurd to suggest that a giant and very profitable company like McDonald's would engage in such a desperate and transparent scheme to glean a few extra dollars. Regular and returning customers at suburban McDonald's stores like the one at Frewville would likely be quick to discover any ongoing pattern of missed items. Moreover, in order to be effective, all staff would have to be complicit in the ongoing defrauding of customers and be willing to remain silent about such activities. It is very hard to believe that every one of the "girls" - the wording of the memo suggests that Frewville McDonald's only hires women which in itself is highly questionable - would meekly go along with instructions to deliberately defraud customers.

And, the figures quoted in the message are only realistic if people do not return to collect the items missed from their orders. While a few customers might not have the time or inclination to return to the store, many would certainly do so.

And, finally, it is also extremely hard to believe that any individual that is astute enough to make it to the position of managing director would be so amazingly stupid as to actually document a scheme to deliberately defraud customers thereby risking serious legal and career repercussions when the scheme was inevitable revealed.

Who actually created the fake memo is so far unclear.
Posted by Shamood at 9:14 PM