Message claims that steel left from the World Trade Center is being used in the construction of new navy assault ship, USS New York. 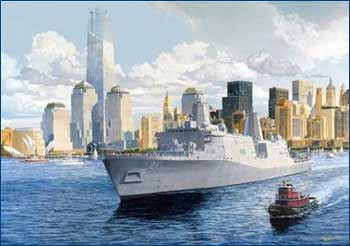 With a year to go before it even touches the water, the Navy's amphibious assault ship USS New York has already made history. It was built with 24 tons of scrap steel from the World Trade Center.

USS New York is about 45 percent complete and should be ready for launch in mid-2007 . Katrina disrupted construction when it pounded the Gulf Coast last summer, but the 684-foot vessel escaped serious damage, and workers were back at the yard near New Orleans two weeks after the storm.

It is the fifth in a new class of warship designed for missions that include special operations against terrorists. It will carry a crew of 360 sailors and 700 combat-ready Marines to be delivered ashore by helicopters and assault craft.

"It would be fitting if the first mission this ship would go on is to make sure that bin Laden is taken out, his terrorist organization is taken out," said Glenn Clement, a paint foreman. "He came in through the back door and knocked our towers down and (the New York) is coming right through the front door, and we want them to know that."

Steel from the World Trade Center was melted down in a foundry in Amite, La., to cast the ship's bow section. When it was poured into the molds on Sept. 9, 2003, "those big rough steelworkers treated it with total reverence," recalled Navy Capt. Kevin Wensing, who was there. "It was a spiritual moment for everybody there."

Junior Chavers, foundry operations manager, said that when the trade center steel first arrived, he touched it with his hand and the "hair on my neck stood up."

"It had a big meaning to it for all of us," he said. "They knocked us down. They can't keep us down. We're going to be back."

Be Ware! It's a Cyber World - - Explanation:
This message, which travels via email and is also a popular blog and forum post, claims that a portion of a new US warship named "USS New York" is being built with scrap steel saved from the remains of the World Trade Center.

The claims in the message are true. According to a US Navy Fact Sheet about the new ship:

Steel salvaged from the World Trade Center wreckage will be used in the construction of New York. The shipyard and Navy inspected the steel and found that it was of sufficient material strength so that it could be incorporated into the bow stem of New York.

"We're very proud that the twisted steel from the WTC towers will soon be used to forge an even strong national defense," said New York Gov. George Pataki. "The USS New York will soon be defending freedom and combating terrorism around the globe, while also ensuring that the world never forgets the evil attacks of September 11, 2001 and the courage and strength New Yorkers showed in response to terror."

The Fact Sheet also notes that New York's Governor specifically requested a future warship be given the name "USS New York" to commemorate the victims of the World Trade Center attack:

Governor George E. Pataki wrote a letter to Secretary England requesting that the Navy revive the name USS New York in honor of September 11's victims and to give it a surface warship involved in the war on terror. In his letter, the Governor said he understood state names presently are reserved for submarines but asked for special consideration so the name could be given to a surface ship. The request was approved August 28, 2002.

Our company will treat this steel with dignity and respect," said Dr. Philip A. Dur, president, Northrop Grumman Ship Systems. "This piece of steel has been washed with the tears of Americans and hardened by millions of prayers from around the world. It is our hope that we can bring strength and victory to this steel and to the whole of LPD 21, and that the spirit of the people who represent her namesake state will fill her future crews with pride and bravery.

The information used in the message was taken from an Associated Press article published in April 2006. The artist's rendering of the USS New York that came with the original message was supplied by Northrop Grumman and depicts how the ship might look "steaming through New York Harbor with lower Manhattan and the building that may replace the World Trade Center in the background".

USS New York (LPD 21) will be the fifth vessel in the San Antonio class of amphibious transport ships and will be based in Norfolk, Virginia when completed. The vessel was officially christened "New York" in March 2008.

According to information on the USS New York website, the commissioning of the ship is scheduled to take place on November 7 2009 at a pier in New York Harbor. The article notes:

"Its been 2948 days since the attack, more than a day for every man, woman and child killed. The greatest testament to our resolve is being commissioned into service with the United States Navy. There will be speeches, songs, tears, and emotions so strong its hard to speak. With the words Man your ship and bring her to life the world will change, at least for us. She will never fill the hole, but she will fill our hearts."
Posted by Shamood at 4:23 AM