Email claims that US President Obama has directed the US Postal Service to release a new stamp that honours the Muslim EID holiday season.

Actually, such stamps do exist but they are not new and they were not issued on the order of President Obama. They were first issued in 2001 and have been reissued several times since.

What in Heavens name was he thinking?????? Lord, help our country. 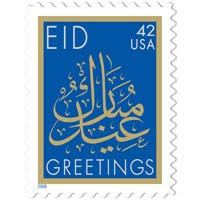 If there is only ONE thing you forward today... let it be this!

REMEMBER the MUSLIM bombing of Pan Am Flight 103!

REMEMBER the MUSLIM bombing of the World Trade Center in 1993!

REMEMBER the MUSLIM bombing of the Marine Barracks in Lebanon !

REMEMBER the MUSLIM bombing of the military Barracks in Saudi Arabia !

REMEMBER the MUSLIM bombing of the American Embassies in Africa !

REMEMBER the MUSLIM bombing of the USS COLE!

REMEMBER all the AMERICAN lives that were lost in those vicious MUSLIM attacks!

REMEMBER to adamantly & vocally BOYCOTT this stamp, when you are purchasing your stamps at the post office.

All you have to say is "No thank you, I do not want that Muslim Stamp on my letters!"

To use this stamp would be a slap in the face to all those AMERICANS who died at the hands of those whom this stamp honors.

REMEMBER ~
Pass this along to every Patriotic AMERICAN that you know and let's get the word out !!!

Here is something to chew on...

They (MUSLIMS) don't even believe in Christ, & they're getting their own Christmas stamp! BUT, don't dare to dream of posting the ten commandments on federal property! This is truly UNBELIEVABLE !!!

Be Ware! It's a Cyber World - - Explanation

According to this protest message, US President Obama recently directed the United States Postal Service (USPS) to release a new commemorative holiday stamp that honours the Muslim Eid holiday period. The email berates Obama for his decision to release the stamp, citing a long list of terrorist attacks carried out by Islamic extremists. It calls on patriotic Americans to boycott the stamp and pass on the information to others.

Such a stamp certainly does exist, but its release was not the result of a directive from President Obama. In fact, the Eid holiday stamp was first issued back in 2001, long before Obama came to power. The stamp has subsequently been reissued several times since 2001, including in September 2009 in a 44 cent version. Information about the stamp on the USPS website notes:

First issued in 2001, the stamp commemorates the two most important festivals in the Islamic calendar: Eid al-Fitr and Eid al-Adha. On these days, Muslims wish each other “eid mubarak,” the phrase featured in calligraphy on the stamp, which translates as “blessed festival” or “may your religious holiday be blessed.”

Eid al-Fitr marks the end of fasting during the Muslim holy month of Ramadan with prayers, feasting, exchanging gifts, and visiting family and friends. Signifying “The Feast of Sacrifice,” Eid al-Adha occurs approximately two months and ten days after Eid al-Fitr. Eid al-Adha comes at the end of the hajjae, the annual period of pilgrimage to the holy city of Mecca and commemorates Ibrahim’s willingness to sacrifice his son Ismail. The stamp was developed with the help of Muslim consultants and experts in Islamic studies.

And a 2001 USPS news release provides more details about the original, 34 cent version of the Eid stamp. It notes:

WASHINGTON, D.C. – The U.S. Postal Service is expanding its Holiday Celebrations Series with a new stamp highlighting the Muslim holiday of Eid.

The 34-cent Eid stamp will be issued on Sept. 1 at the annual Islamic Society of North America's convention at the Donald E. Stephens Convention Center, 5555 North River Road, Des Plaines, Ill, at 11:45 a.m. The stamp will be available at the convention and at post offices nationwide on Sept. 1.

"This is a proud moment for the Postal Service, the Muslim community, and Americans in general as we issue a postage stamp to honor and commemorate two important Islamic celebrations," said Azeezaly S. Jaffer, Vice President, Public Affairs and Communications for the Postal Service, who will dedicate the stamp. "The Eid stamp will help us highlight the business, educational and social contributions of the estimated six to seven million Muslims in this country whose cultural heritage has become an integral part of the fabric of this great nation."

Thus, the stamp was first issued when George W. Bush was President of the United States. At the time, information about the release was published on the White House website. Versions of the protest email have been circulating since soon after the initial release of the stamp in 2001. The current version is very similar to earlier versions except that it incorrectly attempts to link the issuing of the stamp with President Obama.

During their presidencies, both former President Bush and current President Obama have published notices on the White House website extending Eid greetings to the US Muslim community.
Posted by Shamood at 4:35 AM