Email Hoaxes - - Reality of the Mail Showing The Most Beautiful and Lucky Mummy in the World!!!

Email chain letter with an attached photograph of a child mummy claims that those who send the message to twenty friends will receive good luck.

During the investigation of the reality of this mail; it is found that he photograph is genuine and depicts the remains of a child named Rosalia Lombardo who died around 1920. However, the claim that forwarding the message will bring good luck to the recipient is utter nonsense.

Let's have a look towards the contents of the mail containing the so called Lucky Photograph:

The most beautiful mummy in the world!!!
This girl died from a disease at 5 year's old.
Her mother asked a doctor to make her a mummy and kept it in an Italian temple, it's already 80 years. 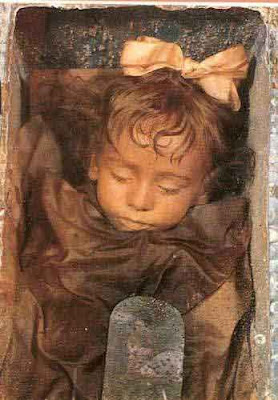 Are you unlucky recently?
1. I'm an engineer; I was promoted as supervisor in one week after I forwarded this message.
2. I'm a stroked man, and I can walk one month later after I forward this message.
3. I'm areca vendor in Taipei , I sold two or three times as usual after I send this to my friend.
4. I'm student of Minx in college (Taipei), I passed all the exams after I sent this message
Good luck will be your house five days later you ! send this short message to 20 friends!

Beware! It's a Cyber World - - Explanation:

According to this message, those who forward the email and the attached photograph to twenty other people will receive good luck. The message lists examples, in somewhat fractured English, of the good luck that has come to other recipients who forwarded the email.

The focal point of the message is a photograph of an extremely well-preserved child mummy. According to the message the little girl was mummified after she died many years ago and was subsequently kept in an Italian temple.

The catacombs date back to the 1599 when the local priests mummified a holy monk for all to see. They wanted to pray to him after death.

In time the locals wanted their relatives remembered in this same way. Soon there were hundreds of corpses. Some of the deceased wrote wills, expressing the clothes in which to bury them in. Some asked to have their clothes changed over a period of time. Included in the catacombs are hundreds of coffins as well. Some contain the corpse that was buried in them. The side is sometimes cut to expose the deceased.

Children are sometimes posed. Two are seated together in a small rocking chair. Rosalia Lombardo was one of the last corpses to make it to the catacombs before the local authorities discontinued the practice. Rosalia died about 1920 and is nicknamed the "Sleeping Beauty". It was said that her sister and family visited her coffin often after her death.

The site includes the above photograph of Rosalia, as well as another image, attributed to Mike Prenis, depicting a wider view of the child in her coffin.

The chain email claims that Rosalia was five years old when she died. However, the King's Capuchins' Catacombs website and most other resources state that she was probably only two years old. Not much information about the circumstances of Rosalia's death is available. Some references indicate that she succumbed to influenza. Rosalia Lombardo was embalmed by Dr Alfredo Solafia who reportedly used chemical injections to preserve the body. The exact procedure for this, apparently very effective, embalming technique was lost when Dr Solafia died.

Visitors to Palermo can visit the Catacombs and view the corpses, including that of little Rosalia.

Although the story of Rosalia Lombardo is quite remarkable, the claim that forwarding her photograph will bring good luck is, in my opinion at least, superstitious nonsense. Are we to believe that denizens of the spirit world have Internet accounts and can track our forwarding activities? I think not! Similar chain letters have circulated via surface mail and email for many years. At least this version does not threaten death or misery for those who do NOT forward the message like some other of its kind

The photograph of little Rosalia is certainly interesting although quite sad. However, sending on a nonsensical chain letter in her name only clutters in-boxes and cheapens this poor child's memory.