Message warns recipients that there is a possibility of dangerous acid rain falling between the 20th and 28th of the month as indicated by dark circles appearing around the moon.

Nothing more than a hoax mail; actually, this warning is utter nonsense and should not be taken seriously. Dark circles around the moon are not an indication of impending acid rain. The alert is not from NASA as claimed in the email. In fact, a NASA spokesperson has denied any connection between circles around the moon and acid rain. Forwarding this false warning will do nothing more than cause unnecessary fear and alarm.

First see below the contents of the mail spreading on the cyber world:

Be careful from the 20th to 28th of this month, There is possibility of an ACID RAIN. The dark circle appeared around the moon on 17th of last month and this is an indication of Acid Rain. Apparently this happens once in 750 years.

It rains like normally but It may cause skin cancer if you expose yourself to it.

So ALERT your dear ones. This information is from NASA.

DO NOT neglect. Plz Forward this to your friends, Better to be cautious than sorry.

This widely circulated message warns recipients that cancer-causing acid rain may fall between 20th and 28th of the month. The warning circulates via email, text message and social networking websites. The message claims that dark circles that were seen around the moon during the previous month were an indication of the impending acid rain event. According to the message, the warning was issued by US space agency NASA. 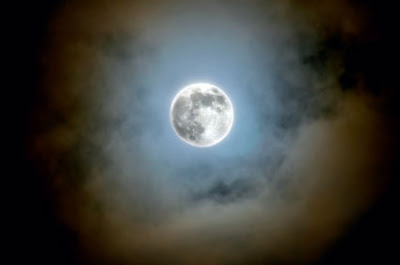 A Jet Propulsion Laboratory (JPL) expert with NASA, Bill Patzert in his response to an inquiry from THEWILL on Monday said a black or dark circle around the moon is a common occurrence in space and has no relationship whatsoever with acid rain. "Dark circles around the moon are more common than you realize. Basically it's an optical illusion when you get very clear skies and fine ice particle in the upper atmosphere. "What you get is the moon, a dark circle round it, then a sky lit up with diffracted moonlight. It looks pretty, that is all. Nothing mystical or paranormal at all,"he added.

Joseph Akinyede, director, African Regional Centre for Space Science and Technology Education and Bill Patzert, a meteorologist at the National Aeronautics and Space Administration (NASA) on Tuesday allayed fears that current dust haze in the country may result to acid rain.

Akinyede, who stated this at the third governing board meeting of the centre in Abuja, said that the foggy weather is not a signal to acid rain as widely rumoured.

Experts in Pakistan were also compelled to quell the rumour after the warning began causing alarm among Pakistani citizens. In an April 16 2010 article, Pakistani news outlet the Daily Times notes:

Pakistan Meteorological Department (PMD) Director General Dr Qamaruz Zaman Chaudhry on Thursday refuted the rumours about ‘acid rain’ in the coming week saying, “the acid rain alerts being attributed to NASA are false.” Talking to this news agency, he said the rumours about chances of ‘acid rain’ during April 20- 28, through messages, emails and other blogs were all false.

Moreover, while acid rain can have a detrimental effect on human health, there are no indications that it will directly cause skin cancer to those who are exposed to it. Information about the effects of acid rain on human health published on America's Environmental Health Agency (EPA) website notes:

Acid rain looks, feels, and tastes just like clean rain. The harm to people from acid rain is not direct. Walking in acid rain, or even swimming in an acid lake, is no more dangerous than walking or swimming in clean water. However, the pollutants that cause acid rain—sulfur dioxide (SO2) and nitrogen oxides (NOx)—do damage human health. These gases interact in the atmosphere to form fine sulfate and nitrate particles that can be transported long distances by winds and inhaled deep into people's lungs. Fine particles can also penetrate indoors. Many scientific studies have identified a relationship between elevated levels of fine particles and increased illness and premature death from heart and lung disorders, such as asthma and bronchitis.

The EPA Acid Rain website also notes that the "precursors, or chemical forerunners, of acid rain formation result from both natural sources, such as volcanoes and decaying vegetation, and man-made sources, primarily emissions of sulfur dioxide (SO2) and nitrogen oxides (NOx) resulting from fossil fuel combustion" and can occur when "gases react in the atmosphere with water, oxygen, and other chemicals to form various acidic compound". Acid rain has therefore been recorded in many parts of the world at many different times. Thus, it is simply ridiculous to suggest that an acid rain event only happens once every 750 years as claimed in the warning message.

The bogus warning message does not contain any specific dates, which means that it is likely to continue its pointless journey around Cyberspace for many months or even years to come. Examples of this hoax message first began appearing in my email inbox, in early February 2010. Since these examples also spoke of circles around the moon "last month", the suggestion was that the acid rain event was to take place in late February. Of course, no such event occurred in February, nor did it occur in March as suggested in the next wave of nonsensical warnings. This trend is likely to continue month by month. Moreover, although the warning first began circulating around Nigeria and neighbouring countries, it does not specify any particular geographic region of the world. Thus, people all over the world are now receiving the warning, with many apparently believing that it pertains to their own region.

Sending on this absurd warning will serve only to raise unnecessary fear and alarm within communities. If you receive this hoax message, please do not send it to others. And please take a moment to inform the sender that the message is a hoax.