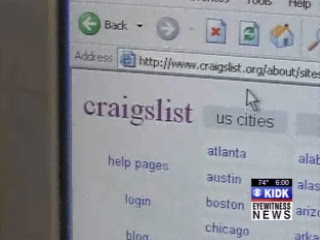 POCATELLO - Pocatello Police are receiving an increase of calls from local people who have fallen victim to an Internet scam. If you are a Craigslist user here's why you need to beware.

This 5 bedroom 2 bathroom house used to be for rent for $1500 dollars, it's had a homeowner in it for the past year but this last weekend it was listed on Craigslist for only $700 a month. This too great of a deal turned out to be a big scam.

Rhonda Byers has lived in this home for over a year, and this weekend she had more than 20 unexpected visitors knocking at her door.

"It's very frustrating. People coming and asking, 'Can we just see the inside?' We said, 'No it's not for rent,'" explained Rhonda Byers, a homeowner.

Her house had been listed on Craigslist under rental properties, and it was only listed for $700 dollars a month.

"He said, 'I have it right here on my phone because it's on Craigslist.' And I said, 'You have got to be kidding me?' And we went and looked it up on the computer and sure enough it was," said Byers.

The so called renter on Craigslist asked for $300 dollars to be wired to her and they would send the resident the keys.

"We informed everybody that came to our house that this is was a scam, we said, 'Don't send these people money,'" Byers said.

But Rhonda is not the only local person that's recently been the center of a scam.

Vanessa and Daniel Williams were hoping to get into a new rental home before this Friday. When they saw the local rental listed on Craigslist they jumped on the offer. They filled out an online application, and wired the so called rental unit owner the money.

"I sent her the $900 and she gave me a run-around about the keys and I never got the keys. I went to the house and called the brokerage company and they said they had never heard of those people," explained Vanessa. "I was raised to trust people. For somebody to do this to my family, especially with my son, it really hurts."

Now the Williams stand without their $900 and behind on their bills.

Pocatello Police say these families are only two of the many victims of these types of scams.

"The Internet is making the scams much more accessible to the scammers. And so we are seeing a proliferation of them all the time now, daily now. The main key is if you're asked to wire funds to anywhere be it Western Union, Money Gram or anything else be extremely cautious. Once that money is wired, it's gone. Wiring money via Western Union or Money Gram or any of those is a huge tip to suspect a fraud," explained Kim Ellis, with the Pocatello Police.

Now for anyone out there that might detect a scam on Craigslist please call the police at 234-6241.

Beware that senior citizens are the most vulnerable to scams. Police say that family members can help out by keeping an eye out for fraudulent emails and items in their elders mailbox.
Posted by Shamood at 10:02 PM