Email Hoax: National Geographic's "The Photo of The Year" - - Reality of The Mail Showing Shark Attacking The Helicopter

Email that includes an image depicting a large shark jumping at a helicopter claims that the photograph was nominated by National Geographic as "The photo of the year".

In fact, the image is not a genuine photograph. Instead it is a combination of two entirely unrelated photographs. And the hoax image certainly was not nominated by National Geographic as "The photo of the year".

Before analyzing the reality behind this hoax mail; let's have a look to the mail contents:

Although this looks like a picture taken from a Hollywood movie, it is in fact a real photo, taken near the South African coast during a military exercise by the British Navy.

It has been nominated by National Geographic as "The photo of the year". 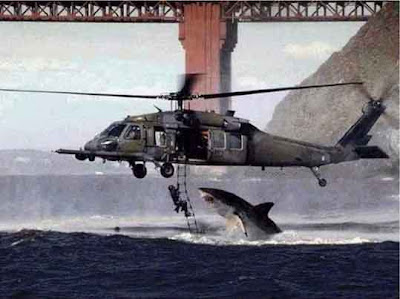 
Beware! Its a Cyber World - - Explanation:

This photograph supposedly depicts a very large shark leaping out of the water to attack a crew member suspended on a ladder beneath a Navy helicopter. However, the image is in fact a combination of two entirely unrelated photographs. Both the helicopter with dangling crew member and the breaching shark are real photographs, but they were not taken at the same time or at the same location.

Back in 2001, a prankster apparently created the composite image using two genuine photographs and it has been circulating sporadically ever since, along with a plausible cover story.

The photograph of the helicopter was taken by Lance Cheung during a military exercise in San Francisco and shows a HH-60G Pave Hawk US Air Force helicopter. The Golden Gate Bridge is clearly visible in the photograph's background. The prankster has reversed the original helicopter image to better suit his or her creation: 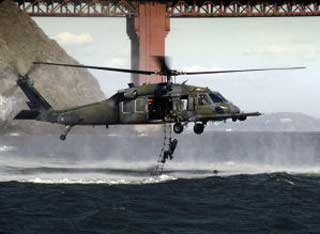 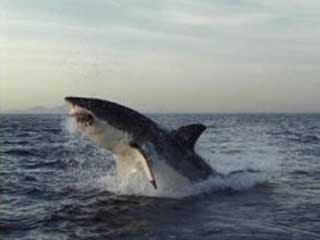 Although the image is a hoax, it is nevertheless a remarkable piece of work. Most likely, it will continue to circulate for years to come.
Posted by Shamood at 6:24 AM