Email claims that an attached image showing a large shark very close behind a scuba-diving couple is a real photograph taken during a family holiday in Australia.

With all the due research about the mail; it is found that this image is not a genuine photograph. In fact, it is a composite picture created by manipulating two or more other images. The image was an entry in a Photoshop contest.

Let's have a look to the image and mail contents:

Subject: Read before you look at the pic

Family on holiday in Australia for a week and a half when husband, wife and their 15 year old son decided to go scooba diving. The husband is in the navy and has had some scooba experience.

His son wanted a pic of his mum and dad in all their gear so got the under water camera on the go. When it came to taking the pic the dad realized that the son look like he was panicking as he took it and gave the "OK" hand sign to see if he was alright.

The son took the pic and swam to the surface and back to the boat as quick as he could so the mum and dad followed to see if he was OK. When they got back to him he was scrambling onto the boat and absolutely packing it.

When the parents asked why he said "there was a shark behind you" and the dad thought he was joking but the skipper of the boat said it was true and that they wouldn't believe him even if he told them what it was. As soon as they got back to the hotel they put the pic onto the laptop and this is what they saw.

Would you have stayed to take the picture?? 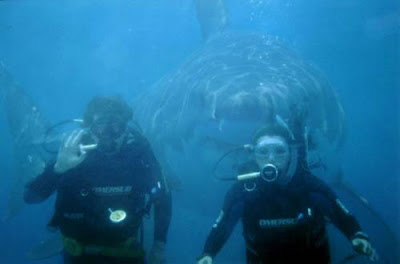 This striking image of a scuba diving couple being approached from behind by a very large shark is currently circulating via email. According to the message that comes with the picture, it was snapped by the couple's son during a family holiday in Australia. The relaxed demeanor of the divers adds to the visual impact of the picture since they are seemingly unaware of impending danger. What's more, the shark almost seems to be smiling, perhaps as it contemplates the tasty meal just ahead.

The message claims that both the pictured couple and the panicked youngster who snapped the photograph luckily made it back to the boat without becoming Great White Lunch. And it wasn't until they later viewed the photograph that the couple realized how close was their escape.

However, these claims are completely false and were apparently made up simply to provide a compelling background story to suit the image. Moreover, the image itself is not a genuine photograph, but a composite picture created by manipulating two or more other images. Research indicates that, in fact, the image was an entry in a Worth1000 Photoshop contest titled Vacation Bloopers 6. The entry was created by Worth1000 user "MataleoneRJ" and was titled My first diving in the vacations.

The deception becomes clear when one views the original, and unaltered, shark photograph (shown below). The Photoshop artist has cleverly merged an unrelated photograph of a diving couple with the shark photograph so that it appears that the shark is swimming just behind them. The placement of the divers in the manipulated image makes the shark appear to be much larger than it really is. 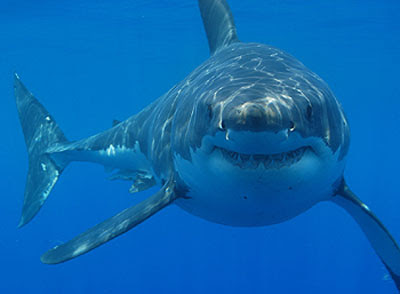 This shark image can be viewed on the Great White Adventures website.
Photoshop contest entries regularly escape the confines of the contest website and begin circulating via email and online, often accompanied by a fanciful tale invented by some unknown prankster. Within the context of the original contest website, the status of these manipulated images is quite clear and no deception is intended. However, once they stray outside of this context, these manipulated images are quite often good enough to fool many recipients into believing that they are genuine photographs.