Online ads selling everything from teeth whiteners to premium text messages made it into the 2009 Top 10 scams listed by the B.C. branch of the Better Business Bureau. 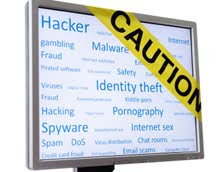 The Vancouver-based bureau focused on internet scams this year because they have grown so quickly in number and sophistication.

"The main issue is all about consent," spokesman Mark Fernandes said in an interview with CBC News on Monday.

"Some of the scams are just a bit of misleading advertising. A lot of the time, the consumer's credit card information is going from one company that they know they're doing business with to another third-party firm that they don't have a relationship with. So it's not one transaction but two."

It's a classic bait-and-switch operation now making the rounds on the internet. Customers think they're buying one product but end up with another. And worse, they're being billed monthly at a much higher rate, he said.

The products can range from tooth whiteners to premium text messenging services to offers of access to government grants. Different products, same modus operandi, he said.

According to the bureau, web marketers are savvy about consumers who click first and ask questions later. They profit from it, while consumers lose.

The Canadian Anti-Fraud Centre, known as Phonebusters, recorded nearly 200,000 complaints this year. And according to the federal Competition Bureau, internet scams went from being the fourth most common scam complaint in 2007 to the top complaint in 2008 and continuing into 2009.

The Better Business Bureau released this list of top scams, not in order of severity:

1. Health claim scams: A bogus product makes a "breakthrough" health claim on the internet or promises cures. These have flourished during the swine flu crisis.

2. Not-so-free trials: An online ad invites you to try a new diet product or teeth whitener, but many websites don't disclose the billing terms and conditions, or list them on another page, where consumers rarely look.

3. ID theft: Online scammers send emails that look legitimate, requesting that your "account information needs to be updated." Another tactic called "scareware" has a pop-up message showing that your computer is infected with a virus and you need to visit a website to purchase and download anti-virus software that would fix the problem.

4. Home repair ripoffs: In this more old-fashioned scam, homeowners are told they need an immediate furnace replacement because of a crack in their heat exchanger, or the "contractor" has a gas-sniffer device that shows high carbon monoxide levels.

5. Small business loan and supply scams: Companies call businesses, pretending to be a regular supplier looking to confirm an address in a directory. Once bills arrive for unwanted advertising or overpriced supplies, aggressive "collection" agents call with threats of legal action.

6. Free government money schemes: Companies offer "free" advice on obtaining government grants. Often social networking sites and online ads will point to blogs that appear to be written by everyday people who are sharing the secret of how they received thousands of dollars in grants from the government to pay off their debt.

7. Business opportunities: Often, they are illegal pyramid schemes, where new capital brought on by new investors is keeping this imaginary investment afloat.

8. Cashback fraud: A buyer agrees to pay your asking price of something you're selling online, but sends you a cheque or banker's draft for a larger sum. You're asked to cash the cheque and send a money transfer for the difference. Sure enough, the cheque bounces a few days after your money transfer has left your account.

9. Hidden cellphone charges: People who sign up to play online games or take IQ tests find themselves also signed up for expensive premium text services for their cellphone through third-party companies.

10. Mystery jobs scams: Mystery shopper ads in newspapers or online are in most cases bogus services requiring you to pay money upfront.