"Black in the White House" - - A Recent Email Hoax: New Version of an Old Hoax Named "Virtual Card for You" Circulated in 2000

Message warns that an email attachment named "Black in the White House" contains a damaging computer virus that can destroy the hard drive of the infected computer.

This is totally a false mail with no reality in its contents. In fact, this is a renewed version of an old hoax; spread on the internet almost nine years back in 2000.

Subject: Do not open any message

PLEASE CIRCULATE to your friends, family and contacts.

In the coming days, Do not open any message With an attachment called: Black in the White House, Regardless of who sent you ... It is a virus that opens an Olympic torch that burns the whole hard disk C of your computer. This virus comes from a known person who you had in your list Directions. . That's why you should send this message to all your Contacts.

It is better to receive this email 25 times to receive the virus and Open .. If you receive a message called: black in the white house, even Sent by a friend, do not open and shut down your machine immediately. It is the worst virus announced by CNN. A new virus has been discovered Recently it has been classified by Microsoft as the virus most destructive ever. This virus was discovered yesterday afternoon By McAfee. And there is no repair yet for this kind of virus. This virus Simply destroys the Zero Sector of the hard disk, where information Vital function is stored.

This message warns recipients to watch out for emails with an attachment called "Black in the White House". The message warns that opening the attachment will launch a destructive computer virus that will "burn" the hard drive of the recipient's computer thereby damaging it beyond repair. Supposedly, the virus destroys the "Zero Sector" on the infected computer's hard drive. According to the warning, the virus has been classified as the "most destructive ever" by Microsoft and CNN. 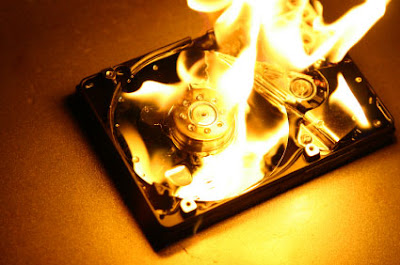 You should be alert during the next days: Do not open any message with an attached filed called "Invitation" regardless of who sent it. It is a virus that opens an Olympic Torch which "burns" the whole hard disc C of your computer. This virus will be received from someone who has your e-mail address in his/her contact list, that is why you should send this e-mail to all your contacts. It is better to receive this message 25 times than to receive the virus and open it.

If you receive a mail called "invitation", though sent by a friend, do not open it and shut down your computer immediately.

This is the worst virus announced by CNN, it has been classified by Microsoft as the most destructive virus ever. This virus was discovered by McAfee yesterday, and there is no repair yet for this kind of virus. This virus simply destroys the Zero Sector of the Hard Disc, where the vital information is kept. SEND THIS E-MAIL TO EVERYONE YOU KNOW, COPY THIS E-MAIL AND SEND IT TO YOUR FRIENDS AND REMEMBER: IF YOU SEND IT TO THEM, YOU WILL BENEFIT ALL OF US

And the "Invitation" hoax is in turn a revamped version of the even older Virtual Card for You hoax that began circulating as early as the year 2000:

PLEASE SEND THIS TO EVERYONE ON YOUR CONTACT LIST!! A new virus has just been discovered that has been classified by Microsoft as the most destructive ever. This virus was discovered yesterday afternoon by McAfee . This virus simply destroys Sector Zero from the hard disk, where vital information for its functioning are stored.

This virus acts in the following manner:
It sends itself automatically to all contacts on your list with the title: "A Card for You".

As soon as the supposed virtual card is opened the computer freezes so that the user has to reboot. When the ctrl+alt+ del keys or the reset button are pressed, the virus destroys Sector Zero, thus permanently destroying the hard disk. Yesterday in just a few hours this virus caused panic in New York , according to news broadcast by CNN.

This alert was received by an employee of Microsoft itself. So don't open any mails with subject: "A Virtual Card for You. " As soon as you get the mail, delete it !! Please pass this mail to all of your friends.

Forward this to everyone in your address book. I'm sure most people, like myself, would rather receive this notice 25 times than not at All.

There have been a number of other variants based on the original "Virtual Card for You" hoax, including several that circulate in languages other than English. All versions of this hoax are equally untrue and none should not be taken seriously. Forwarding such false warnings serves only to spread misinformation. McAfee, the antivirus company mentioned in the messages, has published a write-up denouncing the warnings as hoaxes.
Posted by Shamood at 9:48 PM