Protest message, supposedly supported by photographs of child brides, claims that 450 girls under ten were forced to marry adult men in a mass Muslim marriage recently held in Gaza.

The story mentioned in the mail is totally false. The text and photographs blatantly misrepresent the true nature of the mass marriage, just to arise a flood of anti-islamic sentiments and hostile debate against Islam and Muslims.

Let's have look on the contents and photographs of mail being circulated via mail and posted on different cyber forums:

Muhammed married a six year old bride. But Islam has evolved in 1500 years. In Hamas land, in 2009, the brides are almost seven.

A gala event has occurred in Gaza.

Hamas sponsored a mass wedding for four hundred and fifty couples. Most of the grooms were in their mid to late twenties; most of brides were under ten.

Muslim dignitaries including Mahmud Zahar, a leader of Hamas, were on hand to congratulate the couples who took part in the carefully staged celebration.

"We are saying to the world and to America that you cannot deny us joy and happiness," Zahar told the grooms, all of whom were dressed in identical black suits and hailed from the nearby Jabalia refugee camp.

Each groom received a gift of 500 dollars from Hamas.

"We are presenting this wedding as a gift to our people who stood firm in the face of the siege and the war," local Hamas strongman Ibrahim Salaf said in a speech.

The wedding photos tell the rest of the sordid tale. 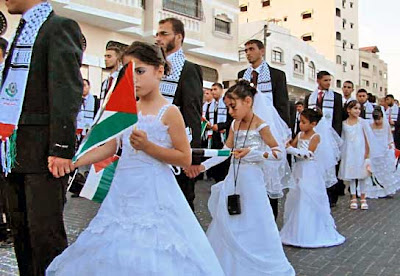 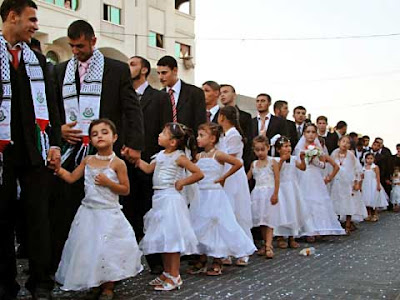 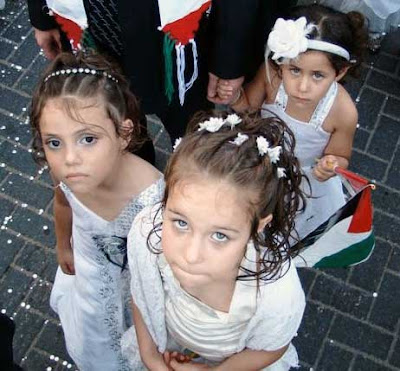 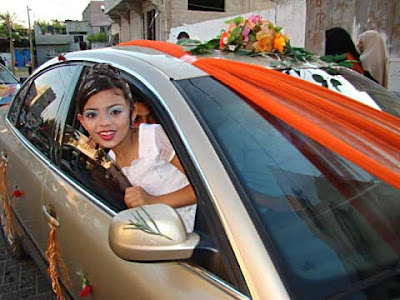 Messages like the example included above are currently circulating via email and have also been posted to a great many blogs, online forums and social networks around the world, where they have generated a flood of often vitriolic anti-Islamic sentiment and very heated debate. The messages claim that hundreds of pre-pubescent girls were forced to marry adult grooms in a recent mass wedding ceremony in Gaza organized by Palestinian Islamic organization, Hamas. According to the messages, 450 brides, most of whom were under ten years old, were married to 450 grooms most of whom were in their mid to late twenties. The messages accuse Hamas of actively and willfully promoting pedophilia and condemn the act as "bizarre & shameful".

Support for these claims is centered around several photographs supposedly showing tiny "brides" dressed all in white and holding the hands of their much taller, grown-up "grooms". However, while a mass wedding did indeed take place in Gaza in July 2009, the claim that the photographed children were actually the brides in the ceremony is untrue. These photographs represent virtually the entire "body of evidence" that supports the claims in these indignant protest messages. However, this supposed photographic "evidence" is in fact meaningless because they do not actually depict child brides at all. Instead, they show young family members of either the bride or the groom. At such Muslim wedding ceremonies, it is a tradition for young girls to dress up and play a role in the celebrations in a way similar to how flower girls are used in Western wedding ceremonies. Although these young girls do look like little brides, they are certainly not the ones getting married.

Hamas has vehemently denied that any children were married at the event. In fact, a Hamas official told WorldNetDaily that the youngest girl married at the ceremony was 16 years old while most were over 18 years of age.

Nearly a thousand Palestinians celebrated marriage on Thursday night in a ceremony organized by Hamas in the north of the Gaza Strip.

Hamas dignitaries including Mahmud Zahar, one of the militant group's top leaders, were on hand to congratulate 450 grooms who took part in the carefully stage-managed event.

"We are saying to the world and to America that you cannot deny us joy and happiness," Zahar told the men, all of whom were dressed in identical black suits and hailed from the nearby Jabalia refugee camp.

Each groom received a present of $500 from Hamas, which said its workers had also contributed five per cent of their monthly salaries to add to the wedding gift.

Much has been made of the fact that no photographs of the real brides have made it into news reports about the event. This seeming omission has been seized upon by many commentators as more evidence that the children in the photographs really are the brides in spite of denials by Hamas and others. However, the absence of the brides is in fact just a reflection of how Muslim public ceremonies are conducted. News reports indicate that "the 450 brides shared none of the glamour, taking seats among the audience" while their grooms actively participated in event ceremonies. And a SkyNews video report about the mass wedding notes in reference to the brides that "The women are elsewhere". Tim Marshall, the journalist who presented the SkyNews video, was actually there at the mass wedding ceremony. In a blog post about his attendance, Marshall reiterates that the brides were elsewhere, noting that some of them were among the guests. He also writes:

The men and women are sitting, Most ignore the speeches, some even ignore the prayers. Then the fireworks explode, the cheering begins, and in march the Hamas scouts, bashing drums, looking every inch the future Hamas fighters many will be. Then the grooms, aged about 18 to about 28. They are holding hands with their young nieces and cousins, little girls aged from about 3 to 8, made up to the nines, wearing white wedding dresses.

Up they all go to the stage, the cheering and music grows ever louder. The girls were having the time of their lives, but, getting a little bored after a while, came down off the stage to dance with each other and play games.

Our report on this put it into context saying that it took place just a mile from the Israeli border and was a message from Hamas about its strength confidence and future fighters. Oh and that the brides were elsewhere. Pretty straightforward. It never struck me for a moment that the little girls might later be described in the bloggersphere as the brides! How naive I am.

Moreover, the 2009 mass-wedding is not at all unprecedented. An October 2008 New York Times article reporting on a Hamas sponsored mass wedding held in that year, notes that it was the tenth such event held in Gaza. The article also mirrors reports about the 2009 event, noting:

The 300 grooms were dressed in black pants, white shirts and colorful ties but no jackets, because of recent budget cuts. The brides, sitting separately among the women, wore head scarves and black robes over their evening dresses but were easily spotted by their heavy makeup. The couples had all signed marriage contracts before the event.

Ironically, reports about the 2008 event also featured photographs of young girls clad in white bride-like dresses. The New York Times article shows such youngsters dancing in front of the grooms. Apparently, the poison-pen denizens of the blogosphere saw no reason to conclude that the children in photographs of the 2008 mass wedding were actually the brides, so one wonders why they have so rabidly done so in 2009.

Perhaps the 2009 images are a little more compelling and it is, I suppose, at least possible that whoever first perpetrated these inflammatory falsehoods did so out of genuine misunderstanding. What is less forgivable - "bizarre & shameful" even - is that many hundreds of bloggers have gleefully perpetrated such errant nonsense in their publications without taking the few minutes required to check the veracity of its claims. While free speech is (or should be) a fundamental human right, perhaps even home-based citizen journalists should take at least some responsibility in ensuring that the information they publish is factual and accurate.