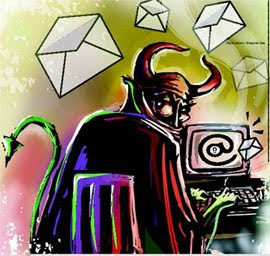 Charletta Key, 46, said she spotted an advertisement for secret shoppers about a month ago and decided to apply. The seasonal tax preparation worker hoped to parlay a love of shopping into IFP Management Services Inc. The letter directed Key to cash the check at her bank, take $400 for her pay and use another set amount to shop at a selection of four stores. Key was supposed to send the remainder of the money to an address in Canada.

Moments after Key presented the check at the bank, bank employees summoned Duluth Police. They arrested Key on a felony charge of first-degree forgery.

“They were looking at it as if I was the responsible party,” Key said. “They did not see that I was being the victim of a scam.”

Key’s 20-year-old daughter sent an email to Gwinnett County Sheriff Butch Conway pleading with him to investigate the situation. Deputies questioned Key and examined the letter. Conway then allowed Key to be released from jail Wednesday on her own recognizance.

“He realized she was more than likely a victim here,” said the Sheriff’s spokeswoman, Stacey Bourbonnais.

A spokesman for the Duluth Police Department did not return a call seeking comment on Friday.

There has been a significant uptick in Internet-based fraud over the past 16 months. The number of complaints about online crime hit a record high of 275,284 in 2008, up from 206,884 the previous year, according to the Internet Crime Complaint Center, which is a partnership between the FBI and the National White Collar Crime Center.

Craig Butterworth, a spokesman for the National White Collar Crime Center, said job scams in particular are preying on an increasingly desperate pool of victims.

“When times are flush, people may be a lot more cautious, but people are desperate now and they are latching on to anything that may present itself as a hopeful alternative,” Butterworth said.

There are ways to avoid becoming an unwitting accomplice to fraud. Never deposit or accept wire transfers or checks into your bank account from sources you’re not familiar with, said Butterworth.

He also urged job hunters to investigate any opportunities they find online by checking to see if the company has a legitimate website and a brick-and-mortar location. He also recommended checking the Better Business Bureau for complaints.