I've been swanning around Scotland for the last few days attending the wedding of some friends and trying not to do myself a mischief on the dance floor.

While I was in the land of haggis, ginger hair and sporrans I wasn't able to keep you updated with the latest news from the fight against cybercrime, so I'll quickly make amends with these snippets:

Authorities in China are reported to have made a series of arrests following an investigation into an attack that resulted in widespread disruption of the internet for users across the country earlier this year.

Fascinatingly, it appears that the attacks the consequence of a denial-of-service attack launched against rivals by a gang running an online gaming server.

On May 19th 2009, internet users across six different Chinese provinces reported that they were experiencing difficulties using the internet, suffering from slow access speed and finding some sites completely impossible to reach.

It appears that the attack began as an assault against the DNS servers of a firm called DNSPod, which provides services to gaming servers.

Meanwhile in Romania, police have raided 10 houses and detained 7 people as part of an investigation into a chain of internet scams that may have amassed as much as half a million dollars from victims in other countries.

The alleged criminals are said to have spent the proceeds on luxury cars and property.

And finally, word reaches us from the US of A that Albert Gonzalez, the hacker accused of stealing details of 130 million credit cards from customers of stores such as Heartland payment Systems, 7-Eleven, supermarket chain Hannaford Brothers, has made a plea bargain with the authorities in connection

Under terms of the agreement Gonzalez will have to surrender his Miami condo, $1.65 million in cash, his BMW 330i car, hi computers and Glock 27 firearm. Oh, and he'll also receive a sentence of between 15 and 25 years in prison. 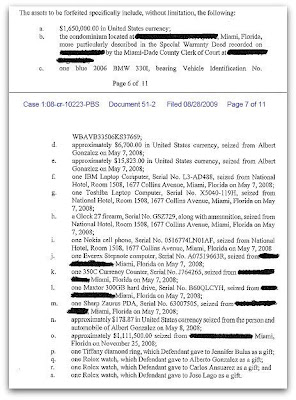 Let's not forget, of course, that Gonzalez was not working alone.