Beware! It's a Cyber World - - Summary:
A widely spreading message tells the story of a man who, twenty years after helped a young wild elephant with a sore foot, believes that he has encountered the same elephant, a belief that ends in tragedy.

The story is just a new version of many old hoaxes of same kind. In fact, this story is totally a JOKE. The elephant encounters described in the message did not take place and the helpful man was not killed. If you somehow missed it, reread the punch line at the end of the message. Versions of the story have circulated in various forms for many years.

Subject: This is Truly An Incredible Story

In 1986, Peter Davies was on holiday in Kenya after graduating from Northwestern University. On a hike through the bush, he came across a young bull elephant standing with one leg raised in the air. The elephant seemed distressed, so Peter approached it very carefully. He got down on one knee, inspected the elephants foot, and found a large piece of wood deeply embedded in it.

As carefully and as gently as he could, Peter worked the wood out with his knife, after which the elephant gingerly put down its foot. The elephant turned to face the man, and with a rather curious look on its face, stared at him for several tense moments. Peter stood frozen, thinking of nothing else but being trampled. Eventually the elephant trumpeted loudly, turned, and walked away.

Peter never forgot that elephant or the events of that day.

Twenty years later, Peter was walking through the Chicago Zoo with his teenage son. As they approached the elephant enclosure, one of the creatures turned and walked over to near where Peter and his son Cameron were standing. The large bull elephant stared at Peter, lifted its front foot off the ground, then put it down. The elephant did that several times then trumpeted loudly, all the while staring at the man.

Remembering the encounter in 1986, Peter could not help wondering if this was the same elephant. Peter summoned up his courage, climbed over the railing, and made his way into the enclosure. He walked right up to the elephant and stared back in wonder.

The elephant trumpeted again, wrapped its trunk around one of Peter legs and slammed him against the railing, killing him instantly. 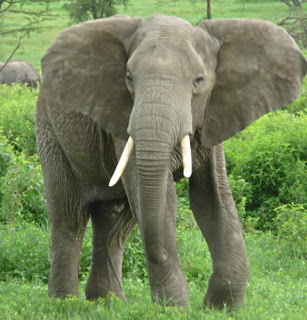 This story has circulated in various forms for many years and predates the Internet. It currently travels via email, blogs and social networks as well as in printed form. The story relates the case of a man who, during a trip to Kenya, helps a wild elephant he encounters by removing a large piece of wood embedded in the animal's foot. According to the story, twenty years later, the man mistakenly concludes that an elephant he encounters at the zoo is the very same animal that he helped back in Kenya - a mistake that has tragic consequences.

However, the story does not relate a real case. In fact, it is a humour piece designed to amuse readers. I include it on these pages simply because a large number of submissions reveal that many recipients apparently do not realize that the story is just a joke and therefore conclude that the events described really happened.

The piece is certainly effective as humour, hence its ongoing popularity as an email forward or message board post. The way the story is written creates an expectation in the reader that the man's second elephant encounter will result in a heart warming and miraculous reunion between the kindly man and his grateful pachyderm friend. Thus, the completely unexpected and rather shocking conclusion is truly amusing. And, of course, the widespread belief that elephants are blessed with very long memories adds substance and credibility to the tale.

The joke has been around in one form or another since at least the 1970's. The following version of the joke was included in the Children's book, The Turbulent Term of Tyke Tiler, which was first published in 1977:

A man was lost in the jungle. He heard a noise and he saw an elephant with a thorn in his foot. So the man took it out. Then the elephant said, "Can I do anything for you?" The man said, "Yes, take me to the end of the jungle." So the elephant did.

Many years went by. One day the man was at a circus and all the elephants came in. One elephant looked at the man and went to him. The man thought that it must be the elephant he had helped many years ago. He picked the man up and smashed him on the ground. It was the wrong elephant.

Some versions present the story as a riddle rather than as a joke. While the current version identifies the hapless man as one Peter Davies, other versions have used the name Mkele Mbembe. This name appears to be derived from "mokele-mbembe" which is the name given to a legendary dinosaur-like creature thought to live in the Congo's Likouala swamp region. Many versions do not specify any name at all.

The saying that elephants never forget has been backed by science.

And it seems that the old adage may be particularly true in the case of matriarchs, who lead the herd.

A study of wild African elephants has revealed that dominant females build up a social memory as they get older, enabling them to recognize "friendly" faces.

They signal whether an outsider is a friend or foe to the rest of the herd, allowing family members to focus on feeding and breeding when there is no danger.

An article on How Stuff Works concurs, noting, "extensive observations have confirmed that elephants indeed remember injuries and hold grudges against their abusers"
Posted by Shamood at 11:29 PM