Email Hoax: Free Promotional Give Aways From Blackberry and Ercisson for Email Forwarders

An rapidly spreading email message claims that Blackberry is giving away free phones to those who forward the email to eight or more people. Another smae type of message is hitting the inboxes equally frequently; which claims to be from Eriscsson and forwarding the same message will make you win a lap top from Ericsson.

The claims in the messages are untrue and baseless. Blackberry or Ericsson are not giving away free phones or laptops to those who forward an email. Previously we have unveiled the truth of such messages that targeted Nokia, Sony Ericsson and others.

Example of mail message from Ericsson looks like shown hereunder:

Its a rare opportunity so please don't miss it. 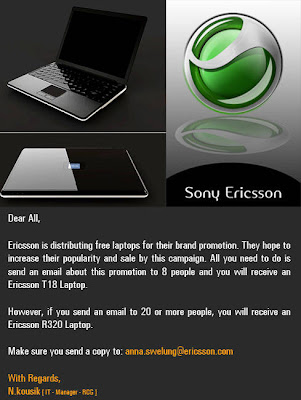 Example of mail message from Blackberry looks like shown hereunder:

Blackberry is giving away free phones as part of their promotional drive.

All you need to do is send a copy of this email to 8 people; and you will receive your phone in less than 24 hrs. Please note that if you send to more than 20 people you will receive two phones.

Please do not forget to send a copy to: amanda.lee@blackberry.com

Sounds easy enough and tempting, too, but get this: the Ericsson T18 is a cell phone, not a computer. Moreover, it's a discontinued model. They don't sell it anymore!

But if you can send it to 20 people or more, you will receive Ericsson R320.

Again, the Ericsson R320 is a cell phone, not a computer. And discontinued, to boot!

What gives? The email above is slightly revised version of a nine-year-old hoax promising free phones to frequent forwarders. Though the phrase "computer laptops" has been substituted in the newer variant to reel in more suckers, evidently the anonymous prankster who revised the original couldn't be bothered to change the model numbers of the supposed promotional items.

The email address to which copies of the forwarded message are supposed to be sent, anna.swelung@ericsson.com, is a corruption of the address specified in the 2000 version of the hoax (anna.swelund@ericsson.com), which, of course, was never valid in the first place.

On May 12, 2009 Sony Ericsson released the following statement in response to a revised version of the hoax:

Sony Ericsson has been made aware of an online email campaign claiming that Ericsson will give away a free laptop computer to users who forward the promotional information. The same campaign includes a photograph of the Sony Ericsson logo and mentions an Ericsson contact name and email number.

Please do not reply to or forward the email if you receive it.

This message claims that the recipient will get a free Blackberry simply by sending the email to eight other people. And, supposedly, if the recipient sends the message to more than twenty people, he or she will be given not one but two Blackberry phones. According to the message, the giveaway is part of a Blackberry "promotional drive". The participant is instructed to send a copy of the email to a marketing manager at Blackberry at the same time that he or she forwards it to the eight or twenty friends.

However, the claims in the message are untrue. Blackberry certainly will not be handing out free products in exchange for forwarding an email. In fact, the message is yet another variant of a long running series of hoax messages that claim that recipients can get free products just for forwarding an email. Email sent to the marketing manager email address specified in the message are returned with a "recipient address rejected: user unknown" error.

Moreover, this email hoax is having a detrimental impact on the reputation of a person who happens to have the same name and occupation as that listed in the message. The real Amanda Lee who is a marketing manager in the IT industry in South Africa is concerned that her name is being circulated in a false association with this hoax message. Amanda Lee has no connection whatsoever with the hoax message and does not work for Blackberry. Her name was added to the hoax without her permission or knowledge. Thus, those who send on this absurd and ridiculous hoax message are not only helping to distribute utterly pointless nonsense, but are also inadvertently helping to damage the reputation of a real person who has done nothing wrong.

And an even earlier version claims that Nokia is giving forwarders free mobile phones:

Nokia Is Giving Away Phones For "FREE"!!

Nokia is trying word-of-mouth advertising to introduce its products.And the reward you receive for advertising for them is a phone free of cost! To receive your free phone all you need to do is send this email out to 8 people (for a free Nokia 6210) or to 20 people (for a free Nokia WAP).Within 2 weeks you will receive a free phone. (They contact you via your email address).

You must send a copy to anna.swelan@nokia.com

Thus it seems clear that some prankster has simply taken an older version of the hoax and re-purposed it so that it targets Blackberry rather than Nokia or Sony Ericsson and tacked on a picture of a Blackberry for good measure.

Many other hoaxes make the absurd claim that a recipient can get free products, services, vouchers or cash just for sending on an email. The tactic is a favourite ruse of Internet pranksters because it virtually guarantees that their ridiculous messages will not only spread far and wide, but will very often continue to circulate for months or even years after they are launched.

Of course, many companies do run promotional campaigns that offer participants the chance to gain free or heavily discounted products or services. However, no legitimate company is ever likely to run a promotion based on the random and uncontrolled forwarding of an email. Real promotions will always include or link to documents that clearly specify such things as start and end dates for the promotion, legal terms pertaining to the promotion and detailed conditions of entry. Hoaxes such as this supposed Blackberry promotion never include limiting factors such as conclusion dates or entry conditions. Therefore, a company foolish enough to lend itself to such an absurd promotional campaign might ultimately find itself obligated to hand over thousands of laptops or phones - an outcome that could potential lead to economic ruin for that company . Thus, it is laughable to suggest that any company would engage in such an ill conceived promotional tactic.

Any message that claims that you can get something - be it free products or services, vouchers, gifts, competition entries or cash - just for forwarding an email is virtually certain to be a hoax. If you receive such a message, please do not further the spread of such nonsense by passing it on to others.