Beware! Its a Cyber World -- Summary:

Through mail and different social networks; a widely circulated protest message claims that, every Friday, many Muslims pray on Madison Avenue and other streets of New York, thereby blocking streets and disrupting traffic. The message includes photographs depicting large groups of Muslims praying.

The images and photographs attached to the said message, though genuine, but the description is inaccurate and misleading. The images depict scenes from the annual Muslim Day Parade in New York City. The parade has taken place every year since 1985. The parade only takes place once per year. Muslims do not block New York streets to pray every Friday as claimed in the message.

Let's have a look to the contents of the message; which is spreading a wrong image about Muslims:

Political Madness – Will History repeat itself in our lifetime? PLEASE, read to the end – and you can make your own decision on how you feel, and send to all friends and acquaintances. At least they wont be able to say – “I didn’t see it coming”. I didn’t take too much notice of this situation when I first heard about it. But now I am concerned. You should be too. People of all faiths should be concerned – that is why you are receiving this.

Be informed, Be Concerned, Be aware, Don’t let Political Correctness silence you.

From an American who is a retired international lawyer in Madrid.

This is an accurate picture of every Friday afternoon in several locations throughout New York City where there are mosques with a large number of Muslims that cannot fit into the mosque - They fill the surrounding streets, facing east for a couple of hours between about 2 & 4 p.m. - Besides this one at 42nd St & Madison Ave, there is another, even larger group, at 94th St & 3rd Ave, etc.,etc. - Also, I presume, you are aware of the dispute over building another "high rise" Mosque a few blocks from "ground zero" - With regard to that one, the "Imam" refuses to disclose where the $110 million dollars to build it is coming from and there is a lawsuit filed to force disclosure of that information - November can't come soon enough.

This scene is in New York City on Madison Avenue, not in France or the Middle East or Yemen or Kenya.

They are claiming America for Allah. If we don't wake up soon, we are going to "politically correct" ourselves right out of our own country! 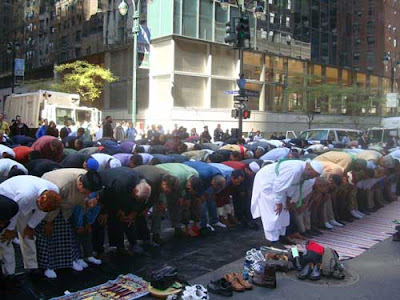 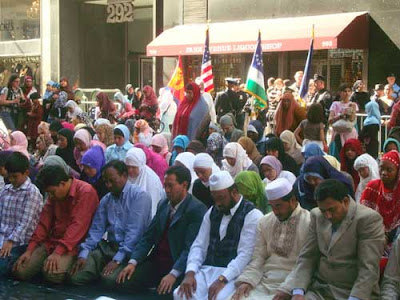 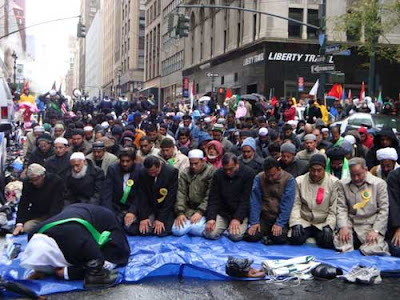 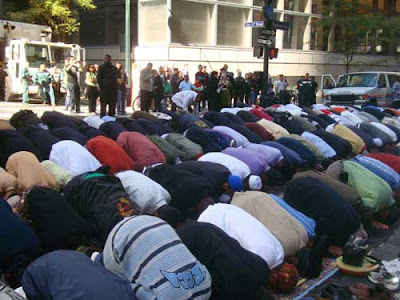 A Christian Nation cannot put up a Christmas scene of the baby Jesus in a public place, but the Muslims can stop normal traffic every Friday afternoon by worshiping in the streets.... Something is happening in America that is reminiscent of what is happening in Europe. This is Political Correctness gone crazy...

Beware! Its a Cyber World -- Explanation:

According to this widely circulated protest message, every Friday afternoon, large numbers of Muslims block streets in various locations in New York City, including Madison Avenue, in order to pray. The message claims that mosques in New York cannot hold all those wishing to worship, so Muslims take over nearby streets each and every Friday afternoon, thereby disrupting normal traffic flow. The message includes several photographs depicting large groups of Muslims praying on Madison Avenue in New York.

The photographs are genuine and do indeed show large numbers of Muslims praying on Madison Avenue. However, the accompanying description is highly misleading and inaccurate. The photographs show scenes from the annual Muslim Day Parade that takes place every September or October in New York City. The key word here is "annual". The mass prayer sessions depicted in the photographs do not take place every Friday in New York as claimed in the message. Muslim worshippers do not block New York streets every Friday afternoon. Claims that such disruptive, street-based prayer sessions occur every week are simply untrue.

New York City is the capital of the world and center of economic, business, social and cultural activities. When it comes to social and cultural activities, it houses many ethnic groups from around the world such as Irish, Italian, Latin, Afro-American, Catholic, Jewish and Muslim. Up until 1985, all these groups were celebrating their ethic and cultural heritage in one form or the other, which included street activities, festivals and parades with the exception of the Muslims.

So, in 1984, few Muslim brothers got together, thought that when there are so many cultural shows and parades are being held in the City then Muslims should also demonstrate their different cultural beauties along with our Islamic values. Muslim representation in the City and State was zero. So they planned about having a United American Muslim Day Parade in New York City which will provide a platform to the Muslim community in this Tri-State are to get together and join the main stream political arena of this country as we have adopted it as our homeland. We are here for good our children have to carry on our Islamic Values in the future when we will be gone.

The parade history states that the first Muslim Day Parade took place in September 1985 and the event has been held every year since.

The 2010 parade was held on 26 September. An article about the parade published in the New York Times reports:

The scene seemed surreal, yet oddly poignant: at a silent, deserted intersection in the center of Midtown Manhattan, beneath bland corporate logos and brick office buildings, hundreds of Muslims knelt on a sprawling tarpaulin, faced due east and commenced the midday call to prayer.

The ceremony, held along a blocked-off portion of Madison Avenue, marked the start of the American Muslim Day Parade on Sunday, an annual event, first held in 1985, that brings together Muslims of many ethnicities and nationalities who worship in the New York region.

Like the many other official parades that take place each year in New York City, the Muslim Day Parade is properly planned and organized prior to the event and has the necessary authorization and permits from the New York City authorities. And, to reiterate, the parade and the prayer sessions that are part of the event take place only once per year, not every week as claimed in this protest message.

Finally, it should be noted that the supposed Edmund Burke quote included at the end of the message - "For evil to flourish, all that is needed is for good people to do nothing" - may well be misattributed. Edmund Burke was an 18th century Irish political philosopher and politician who is often thought of as the father of modern conservatism. Information about the supposed quote on Wikiquote notes:

This is probably the most quoted statement attributed to Burke, and an extraordinary number of variants of it exist, but all without any definite original source. These very extensively used "quotations" may be based on a paraphrase of some of Burke's ideas, but he is not known to have ever declared them in such a manner in any of his writings. It may have been adapted from these lines of Burke's in his Thoughts on the Cause of Present Discontents (1770): "When bad men combine, the good must associate; else they will fall one by one, an unpitied sacrifice in a contemptible struggle."

Burke's alleged quote bears a striking resemblance to the narrated theme of Sergei Bondarchuk's Soviet film adaptation of Leo Tolstoy's book "War and Peace", in which the narrator declares "All that is necessary for evil to triumph is for good men to do nothing", although since the original is in Russian various translations to English are possible.