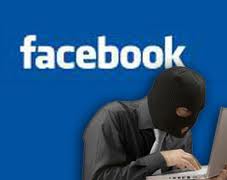 Elizabeth sent you a message.

We are pleased to inform you, that you have emerged as a Grant winner in the 2010/2011 Facebook Grant Award. For further instructions and directives on how to receive your cash prize, Log on to your award notification website.
[Link Removed]

fill the online email verification form on the "Contact Us" page and submit.

To reply to this message, follow the link below:
[Link Removed] 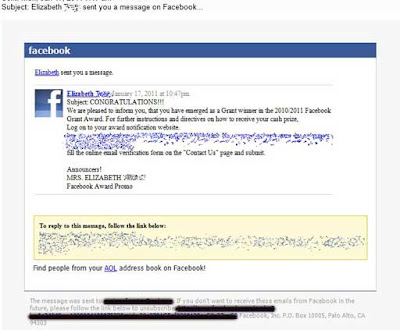 Beware! Its a Cyber World - - Explanation:
According to this message which is delivered via Facebook's own message system, the recipient has won a cash prize in the "2010/2011 Facebook Grant Award". The "winner" is instructed to follow a link in the message to access the "award notification website" where he or she can begin the process of claiming the prize. However, the message is part of an advance fee lottery scam designed to trick recipients into handing over upfront fees and personal information to Internet criminals. A recipient who clicks on the link will be taken to a professional looking, but entirely fraudulent, webpage seemingly tailored to his or her prize win. The page claims that the recipient's email address was randomly selected as the winner and he or she is therefore eligible to claim a cash prize of $750,000. A screen shot of the bogus webpage is shown below: 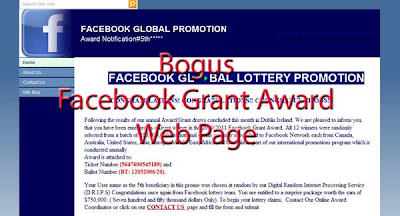 The page then instructs the victim to go to the "Contact Us" page on the bogus site to begin the claims process. The page presents a form asking the victim to submit his or personal information to the "Coordinator": 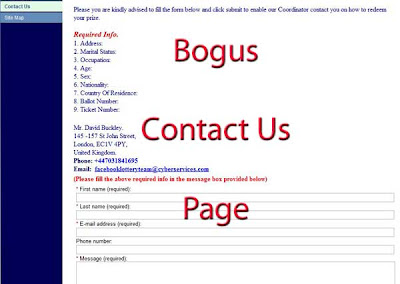 An "About Us" page on the bogus site makes the following claim:

However, all claims in both the initial scam email and on the bogus website are outright lies. There is no prize. The supposed award has no connection whatsoever with either Facebook or the British Government. Despite its use of Facebook as a mode of contacting potential victims and the use of a seemingly professional website as a means of making the "award" appear more legitimate, this scam is virtually identical to an endless stream of other advance fee prize scams that have been distributed in various forms for many years. Those who fill in the information on the bogus form and click the "Submit" button will soon be contacted by a scammer posing as the award coordinator. The scammer will claim that certain fees, ostensibly to cover such expenses as insurance or bank fees or taxation and legal requirements, must be paid in advance before the "prize" can be released. The scammer will insist that under no circumstances can these fees be deducted from the prize itself. Requests for more and more fees and "unexpected" expenses are likely to follow until the victim finally realizes that a scam is afoot or he or she simply runs out of money to send. Of course, the hapless victim will never receive a single cent of the - entirely fictional - cash prize. And it is very unlikely that he or she will ever be reimbursed for any of the money already sent to the scammers. Once the scam operation has reached its conclusion, the scammers behind it will simply disappear with cash in hand. To make matters even worse, the scammers may have gathered enough personal and financial information from their victim to steal his or her identity. These days, advance fee scammers are much more commonly using Facebook as a vector for contacting potential victims. In many cases, the scammers use Facebook accounts that have been hijacked in previous phishing scams. Once they have gained access to a Facebook account via a phishing scam, they can then use the account to send scam messages directly to contacts listed in the account. In other cases, the scammers may create and send emails designed to look very similar to genuine Facebook messages as a means of contacting potential victims. Users should be very cautious of any message in any format that claims that they have won a large prize in a lottery or promotion that they have never even entered. Any claims that the recipient's name or email address has been randomly selected as a winning entry should be treated with the utmost suspicion. Genuine lotteries, awards, or promotions do not operate in this manner.
Posted by Shamood at 9:23 PM

I got the same kind of messege bt unfortntly sent my details coz they used the correct name of the facebook's CEO which made me tend 2 biliv twaz tru..bt atleast a havent sent any cash 2 them.