LEFTOVER ONIONS ARE POISONOUS! I have used an onion which has been left in the fridge. Sometimes I don't use a whole one at one time, so I save the other half for later. Now with this info, I have changed my mind. I will buy smaller onions in the future. I had the wonderful privilege of touring Mullins Food Products, makers of mayonnaise. Mullins is huge, and is owned by 11 brothers and sisters in the Mullins family. My friend, Jeanne, is the CEO.

Questions about food poisoning came up, and I wanted to share what I learned from a chemist.

The guy who gave us our tour is named Ed. He's one of the brothers. Ed is a chemistry expert and is involved in developing most of the sauce formula. He's even developed sauce formula for McDonald's.

Keep in mind that Ed is a food chemistry whiz. During the tour, someone asked if we really needed to worry about mayonnaise. People are always worried that mayonnaise will spoil. Ed's answer will surprise you. Ed said that all commercially-made mayo is completely safe.

"It doesn't even have to be refrigerated. No harm in refrigerating it, but it's not really necessary." He explained that the pH in mayonnaise is set at a point that bacteria could not survive in that environment. He then talked about the quintessential picnic, with the bowl of potato salad sitting on the table and how everyone blames the mayonnaise when someone gets sick. Ed says that when food poisoning is reported, the first thing the officials look for is when the 'victim' last ate ONIONS and where those onions came from (in the potato salad?). Ed says it's not the mayonnaise (as long as it's not homemade mayo) that spoils in the outdoors. It's probably the onions, and if not the onions, it's the POTATOES.

He explained, onions are a huge magnet for bacteria, especially uncooked onions. You should never plan to keep a portion of a sliced onion. He says it's not even safe if you put it in a zip-lock bag and put it in your refrigerator.

It's already contaminated enough just by being cut open and out for a bit, that it can be a danger to you (and doubly watch out for those onions you put in your hot dogs at the baseball park!)

Ed says if you take the leftover onion and cook it like crazy you'll probably be okay, but if you slice that leftover onion and put it on your sandwich, you're asking for trouble. Both the onions and the moist potato in a potato salad will attract and grow bacteria faster than any commercial mayonnaise will even begin to break down.

So, how's that for news? Take it for what you will. I (the author) am going to be very careful about my onions from now on. For some reason, I see a lot of credibility coming from a chemist and a company that produces millions of pounds of mayonnaise every year. 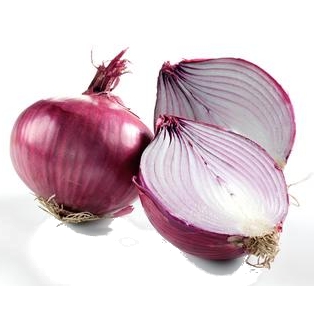 According to this widely circulated health warning, people should not eat raw or left-over onion because onions are "poisonous". The message claims that, according to a food chemist, onions are regularly identified by authorities as the cause of food poisoning. The message warns recipients that onions are actually magnets for bacteria and can therefore attract and grow bacteria faster than other types of food.

However, the claims in the message have no medical or scientific basis and have been dismissed as untrue by medical experts. Dr Joe Schwarcz of McGill University's Office for Science and Society explains:

The fact is that onions are not especially prone to bacterial contamination. In fact, quite the opposite. Onions feature a variety of sulphur compounds that have antibacterial activity. Furthermore, cutting an onion triggers the release of enzymes that initiate a chemical reaction producing propenesulfenic acid, which in turn decomposes to yield sulphuric acid. It is the sulphuric acid that makes you cry by irritating the eyes! But sulphuric acid also inhibits the growth of bacteria. Also, a cut onion's surface dries out quickly, reducing the moisture that is needed for bacteria to multiply.

Schwarcz also notes in his article:


Lastly the terminology that onions are "bacterial magnets" makes no sense. No food attracts bacteria, although of course some are more likely to support bacterial multiplication once infected.

And an article on The Chemist's Kitchen website about the onion's supposed ability to attract bacteria agrees with Dr Schwarcz's findings, noting:


Nothing is a bacteria magnet. Firstly, bacteria have minimal mobility. They usually travel in water droplets, if at all. Sneezes, for example. Moulds can release spores which get blown around but bacteria usually grows in moist environments and are slimy, making getting airborne difficult. Secondly, if there was such a thing as a 'bacteria magnet' it would be enormously useful in the medical field for drawing bacteria away from the ill and infirmed. Not such use has been made of onions.

In truth, onions do not possess any special property that enables them to somehow magically collect bacteria from the air around them. Moreover, the claim in the message that "when food poisoning is reported, the first thing the officials look for is when the 'victim' last ate onions" is not supported by any credible evidence whatsoever. The author of the Chemist's Kitchen article mentioned above states that, "In the 20 odd years I worked in a food laboratory, onions were never mentioned as even a suspect in a food poisoning case".

Moreover, onions do not appear in any lists of foods identified as being most likely to cause food poisoning. Onions are not featured in the list of Common Sources of Foodborne Illness featured on the National Digestive Diseases Information Clearinghouse website. A New York Times report that discusses the Ten Common Food Poisoning Risks does not mention onion. A report about food poisoning on the NSW Food Authority website lists common food poisoning pathogens and the types of food associated with them. Onion is not on the list. The World Health Organization has also published much information about Bacterial Food Poisoning, none of which singles out onion as a high risk food. In fact, although I checked a great many credible sources of information about food poisoning during my research for this article, I could find none that specified onion as being a common cause of food poisoning. Thus, supposed chemistry expert "Ed's" claim that "when food poisoning is reported, the first thing the officials look for is when the 'victim' last ate onions" is untrue.

Of course, if onions are handled or stored in unhygienic conditions - for example if they were touched with dirty hands or sliced on a contaminated cutting board, then they may pass on dangerous bacteria that could make a person sick. However, this is true of virtually any type of food and, as Dr Joe Schwarcz has pointed out, onions are probably less likely to encourage the growth of bacteria than many other types of food.

Thus, the claims in the message have no factual basis and passing on this pointless piece of misinformation will not help anyone.
Posted by Shamood at 7:22 PM