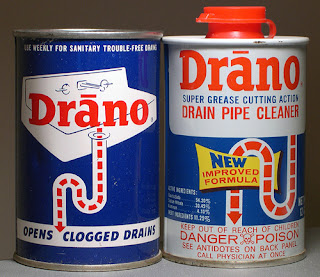 A message is circulating which claims that plastic bottle containing Drano, tin foil and specific amount of water can be found anywhere in unsuspecting people’s houses where any stranger can access without the knowledge of residents like court-yards, lawns, mail-boxes and driveways. According to message this is not a mere plastic bottle but it is a real ‘BOMB’ which can explode once picked up by anyone causing serious injuries.
Let’s have a look to the screen shot of the message below; but remember the message contents might be different with the same intent: 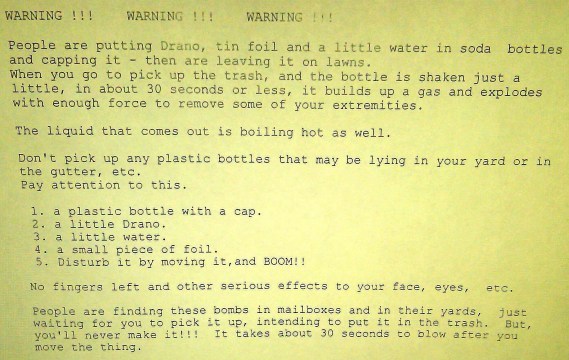 Beware! It’s a Cyber World - - Explantion:
The warning in the message is based on few real incidents in United States after which police have to issue the warning to the residents of York Township. This is happening in the USA and in the other parts of the world, but the chemistry is very simple and, no doubt, will spread. Friends, please be very, very careful. Such bottle BOMBS are also known as MacGyver bombs, acid bombs, works bombs and soda bombs.
Few youngsters are putting Drano or Drain-o (sodium hydroxide), a common household item, and a little water in soda bottles and capping it up - leaving it on lawns. When you go to pick up the trash and the bottle is shaken just a little while you pick it up - in about 30 seconds or less it builds up a gas and explodes with enough force to remove some of your extremities. The liquid that comes out is boiling hot as well.
Don't pick up any plastic bottles that may be lying in your yards or in the gutter, etc. Pay attention to this. A plastic bottle tightly capped with a little Drano in it along with a little amount of water is really dangerous because when anyone shakes it or moves it then just BOOM!! No fingers left and other serious effects to your face, eyes, etc.
See it in action in the video clip below:

quadruple drano bomb - Watch more Funny Videos
Youngsters are doing this for just fun.
This is evil in its purest form. Violence for the sake of violence. Destruction for its own sake. No goal. No point. No purpose. No way to negotiate. A step beyond political terrorism.
Posted by Shamood at 9:56 PM